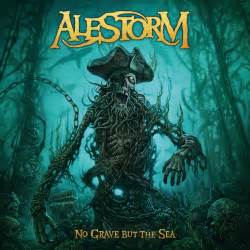 “No Grave But The Sea”
Alestorm
Napalm Records
Tracks: 10

Ahoy, mateys! Gather ‘round for Alestorm’s 5th full-length album: “No Grave But The Sea”! An adventure filled to the brim with awesome pirate tales and party tunes from this trusted metal band. The album’s 10 new tracks contain a lot of what we know and love from Alestorm, but with some new added flair. There are plenty of great metal jams throughout, with just as many anthems and catchy choruses. The album embraces more use of harsh vocals on some tracks, blending them together with frontman Captain Chris Bowes’ great piratey vocals he’s known for.

Alestorm stays fun with jams like “Mexico”, which has a hilarious video, “Pegleg Potion”, and as to be expected their rager “Alestorm,” which is also a great blend of old and new in the band’s sound. Anthems are also present on songs like the title track and one of my new favorite Alestorm songs: “Treasure Island.” The whole albums leads you to an almost 8 minute long epic pirate metal masterpiece that has to be blowing out your speakers this summer.

Fans will love these songs paired with the rest of the band’s back catalog, adding more tales to the metal pirate journey. At some points the pirate tales begin to sound the same, but the band does a great job at really emphasizing on the newer additions. “No Grave But The Sea” is a ton of fun and definitely worth checking out. You can also catch Alestorm on Vans Warped Tour this summer!