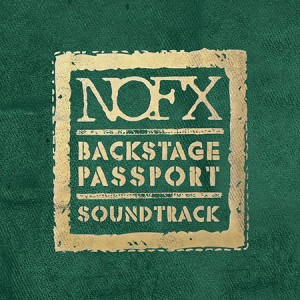 Legendary punk rockers NOFX have just released the long awaited soundtrack from their popular Fuse Channel television series “Backstage Passport”. The show which premiered in 2008 followed the band around the world documenting various shows and occurrences the band experienced while performing in places such as Medellin, Columbia and Osaka, Japan. Though the series only aired for one season there has been recent talk that the band will begin work on a second season of the series and this album release only seems to add fuel to the fire.

Though the album doesn’t necessarily include any new material the album does include the show’s opening and closing themes “Backstage Passport” and “Punk rock Passport” along with a live version of “Leaving Jesusland” and a scaled down accordion tinged version of “I Melvin” which was probably my favorite track off the album. Fans expecting a greatest hits type compilation should take note as this is certainly not the case. Instead the band chose songs from some of their more recent releases which I found helped with the albums appeal however also hurt it some too. If you were a fan of the show and/ or are looking to bolster your NOFX collection then this is a release worth picking up.