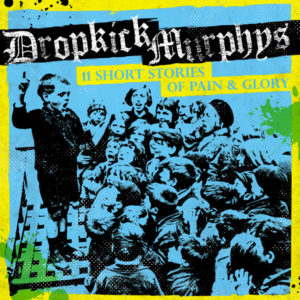 Everyone’s favorite Bostonian punk band Dropkick Murphys are back with a brand new studio album titled “11 Short Stories of Pain & Glory”. The album (the bands ninth) is being released via the groups own Born & Bred label and features 11 tracks which were produced by Grammy Award winning producer Ted Hutt.

With a four year lapse since the release of 2013’s “Signed and Sealed in Blood” fans of Dropkick Murphys have had a bit of a wait for new material however with the release of “11 Short Stories of Pain & Glory” DKM has made up for that lost time. The album opens up with a mostly instrumental track titled “The Lonesome Boatman”. The track which features gang like chanting serves as sort of a rallying call announcing the bands return. I found this to be a fitting way to open the album given the gap between this album and the last. As you make your way through the albums 11 tracks you get a spattering blend of traditional and non-traditional instrumentation mixed with vocalists Ken Casey and Al Barr’s signature Boston snarl. Tracks like the upbeat “Rebels with a Cause” and the rawkus “I Had a Hat” are classic DKM in their subject matter and approach while the 1945 Rogers and Hammerstein show tune “You’ll Never Walk Alone” is given a folk/punk makeover that is new and fresh while still paying homage to the original. Another track worth mentioning is the somber “4-15-13” which is the bands heart-felt tribute to the victims of the Boston Marathon bombing.

“11 Short Stories of Pain & Glory” is everything fans of Dropkick Murphy’s have come to love about the band and their music. The only negative I really found was as the title suggests the album is a bit short. Clocking in at less than 40 minutes I seemed to be through all 11 tracks before I knew it, the upside is the albums diversity makes it easy to listen to multiple times through without it getting stale or redundant negating its short run time. No matter if you are a long time fan of the boys from Boston or a more casual listener the latest release from Dropkick Murphy’s surely has something you will enjoy.