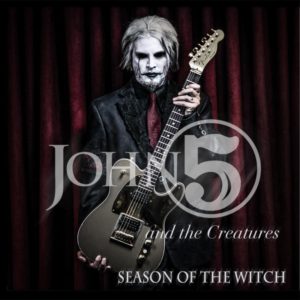 “Season of the Witch”
John 5 and the Creatures
60 Cycle Hum
Producer: John 5
Tracks: 13

World-Renowned guitarist John 5 and his band The Creatures are back with a brand new 13 track album titled “Season of the Witch”. The album (John’s 8th as a solo artist) is being released via 60 Cycle Hum is the follow up to his 2014 release “Careful With that Axe”.

John 5 seems to be one of those guys who is constantly going and perfecting his craft. From his work with Rob Zombie and Rod Stewart to scoring films and appearing as a guest performer on dozens of albums each year the guy always seems to be playing. John’s latest offering “Season of the Witch” blends, twists and smashes a variety of genres leaving practically no musical stone unturned over the course of its 13 track, 37 minute run time. From the sample laden opener “Book of Spells”, to the Rush-esque “Guitar, Tits and Monsters and the layered back twang filled echoes of “Behind the Nut Love” listeners are take on a rollercoaster ride of sound and emotion as the virtuoso lets his guitar do all of the talking. Backed by an equally impressive band known as “The Creatures” consisting of bassist Ian Ross and drummer Rodger Carter the trio connects flawlessly providing an enjoyable listening experience.

Don’t let the albums brief runtime fool you as John 5 and the Creatures pack every ounce of musicality they can in to each and every second of “Seasons of the Witch”. Easily his most diverse solo effort to date John 5 showcases his ability and diverse tastes by blending country, funk, rock and metal with his love for the macabre into one cohesive package that provides listeners with something new each time you listen.