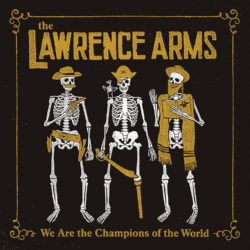 “We Are The Champions of the World”
The Lawrence Arms
Fat Wreck Chords
Tracks: 29

The Lawrence Arms have scoured their entire discography including their releases on Asian Man Records, Epitaph Records, and FAT to bring listeners “We Are The Champions Of The World”. The album serves as both a retrospective and an introduction to the Chicago institution with the track-list being handpicked by the bassist/vocalist Brendan Kelly, guitarist/vocalist Chris McCaughan, and drummer Neil Hennessy. The 29 track release,(which include 5 never before release tracks from the 2006 “Oh! Calcutta!” sessions) showcases how these three friends went from making gritty, lo-fi records to becoming some of the sharpest songwriters in all of punk.

Even before hitting play I knew my ears were going to be in for a treat as the albums expansive 29 track listing combines selected tracks from the bands 6 studio albums. What makes this release really unique is that it combines songs from albums which weren’t all released by just one label giving the listener a true look/listen into the bands nearly 20 year career. Though I was partial to tracks like “100 Resolutions”, “Beautiful Things” and “Brick Wall Views” which feature guitarist Chris McCaughan on lead vocals, Bassist Brendan Kelly had a fair share of tracks like “The Ramblin’ Boys of Pleasure” and “Like A Record Player” which did a great job showcasing his gruff almost Lars Frederickson like vocals. Having two lead vocalists can sometimes hinder a bands performance and impact an albums sound however Kelly’s grittiness and McCaughan’s melodic delivery go together almost perfectly. For a great example of this check out the tracks “Quincentuple Your Money” and “You are Here”.

It doesn’t matter if you are a long time fan of The Lawrence Arms or just checking them out for the first time as “We Are The Champions of the World” is a great collections of songs which offers a little something for everyone. For new comers the albums first twenty four songs will quickly get you up to speed while the albums five unreleased songs including the band’s latest single “Warped Summer Extravaganza (Turbo Excellent)” will help quench the thirst of the more seasoned fans and even though I would have liked to have heard some new material aside from some unreleased demos I still think the release is a solid addition to any punk rock music library.

Track Listing:
1. On with the Show
2. Great Lakes/Great Escapes
3. Alert the Audience!
4. 100 Resolutions
5. The Devil’s Takin’ Names
6. Beautiful Things
7. Quincentuple Your Money
8. The Slowest Drink at the Saddest Bar on the Snowiest Day in the Greatest City
9. Are You There Margaret? It’s Me, God.
10. Right as Rain Part 2
11. Seventeener (17th and 37th)
12. Chapter 13: The Hero Appears
13. The Ramblin’ Boys of Pleasure
14. Light Breathing (Me and Martha Plimpton in a Fancy Elevator)
15. Like a Record Player
16. You are Here
17. Boatless Booze Cruise Part 1
18. Brick Wall Views
19. Sixteen Hours
20. Turnstiles
21. An Evening of Extraordinary Circumstance
22. The Northside, the L&L and Any Number of Crappy Apartments
23. Porno & Snuff Films
24. Demons
25. The Rabbit and the Rooster
26. Catalog
27. Black Snow
28. Laugh Out Loud
29. Warped Summer Extravaganza (Turbo Excellent)