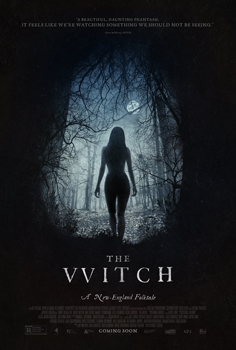 It’s the 1630’s in Puritan New England, and we’ve just watched a family leave the safe confines of their settlement to go out on their own. It’s unsettling. It’s unsafe. And it’s just the beginning.

The Witch, Robert Eggers’s first feature film premiered to much acclaim at the 2015 Sundance Film Festival, and after having seen the film, it’s no surprise. Eggers has managed to create a fresh film in an often-described, stale genre. We follow Thomasin, a teenage girl masterfully played by Anya Taylor-Joy, as her family leaves the community under the threat of church banishment to settle on their own in a remote patch of land. That just happens to be next to an imposingly dark, tall forest. When the family infant is stolen right from under Thomasin’s nose in the most terrifying game of peekaboo that you’ll ever see, we watch as a family based on faith and loyalty unravels. Possession, accusations, suspicions, and paranoia mount as things continue to go from bad to worse for the family. Oh, and did I mention there’s a witch in the woods?

Eggers got his start doing production design and that background influence is strong in the film. The color work is deliberate. Just as the lives of the characters are bleak and their faith restrictive, so too is the landscape Eggers has placed them in. It’s gray, dull, and repetitive; so much so that when we do encounter the witch, we are almost relieved, as she comes with color in her scenes. What at first feels like a breath of fresh air in the barren landscape soon encircles us with a feeling of dread. These vibrant colors do not belong in this world. This type of unease is helped along by the superbly discordant score, which both pulls us in and jars us away throughout the film. The actors do an expert job playing a family on the verge of destruction, walking that fine line between rationality and unsteadiness. The camera work keeps you on the edge of your seat- never have I been so terrified of a goat before.

Watching The Witch is a study in psychological stress. It’s slow-paced and deliberate, and it leaves you with the feeling that you’ve seen something that you weren’t supposed to. The fact that the film is largely based off of historically real accounts of events of that time period only adds to this overwhelming feeling of unrest. This is not the film to see if you are looking for a “jumpy” horror film, but if you are looking for something that will get under your skin and will still have you thinking about it days later, The Witch is for you.

One Reply to “Film Review “The Witch””