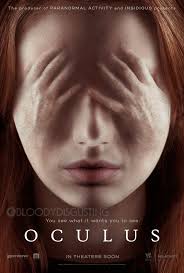 If the new film “Oculus” were a drug, it would be dope; because that’s what this movie is. I entered into watching it knowing almost nothing about it. All I knew was that it was a horror film put out by WWE Studios which, for whatever reason, was always said in the past with negative connotations. This film, I believe, should give the production company a little more respect. I’ve never been a fan of MTV, but if it weren’t for that station’s book and film division we wouldn’t have gotten the novel “The Perks of Being a Wallflower” or the film it inspired.

“Oculus” isn’t a haunted-house story as much as it is a haunted ITEM story with said haunted item leading to a myriad of phenomena within a house. The story finds the Russell family coming into possession of a mirror known as the Lasser Glass. This glass comes with a history of either harming its owners or causing the owners to harm themselves. The film does a terrific job within the first fifteen minutes of imbuing the Lasser Glass with a sense of supernatural power. By the time you reach the twenty-minute mark you fully believe, as much as Kaylie Russell (Gillan) does, that this mirror absolutely has the ability to do harm.

Kaylie’s brother, Tim, (Brenton Thwaites) is released from an institution, a place he has been since he was a young child after being held responsible for the shooting death of his father. Upon his release Kaylie recruits Tim to follow through on a promise they made as children: destroy the Lasser Glass.

This film is so saturated in nuance and subtlety that multiple viewings are definitely needed to appreciate the care put into the crafting of the film by director Mike Flannagan, who also co-wrote the script. With repeated flashbacks going from the present day to a period labled “11 Years Earlier, it could be very easy to lose the thread of the story. The flashback scenes are saved in part by the fact that 2002 doesn’t look too much different than 2013. Hair and clothing styles are relatively the same.

Credit director Flannagan with being very meticulous and ensuring a dozen instances of continuity while taking the story from one time to another. All of the scares are solid and come from within the story; none of the scares feel forced. Even the ones you could see coming were still executed in a way that it was unnerving. The special effects are well done and not overused, blending perfectly with the special make up effects.

What really holds this film together are the performances, which lend an air of believability to the story. Most notable are young actors Annalise Basso and Garret Ryan. Both youngsters deliver performances that belie their youth. Again, this is a haunted item story that feels like a haunted-house story. And as a haunted-house story it is the best I have seen since 1980’s “The Changeling.” Simply put: it’s a great ride!

Filed Under: Film Reviews Tagged With: