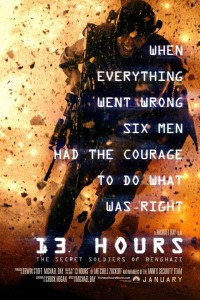 There is a great sketch by Monty Python called “The Bookshop” where a man tries to buy books by authors with familiar names. But instead of Charles Dickens, he’s looking for Charles Dikkens (“Dickens with two k’s, the well-known Dutch author”). This sketch immediately came to mind as I watched “13 Hours: The Secret Soldiers of Benghazi,” which is credited as being directed by “Transformers” helmer Michael Bay. Surely, I thought, it must be Michael Baye (the well-known Dutch filmmaker).

Libya. Since the death of Dictator Muammar Gaddafi, the country has been in turmoil. Rival groups infiltrated and raided the various weapons warehouses that Gaddafi had well stocked and the country has become the 21st Century version of the Wild West. In the town of Benghazi there is a compound that holds 26 members of the C.I.A. They put their safety in the hands of a small group of men, contracted by the US government. Things start going crazy when it’s learned that the US Ambassador to Libya, Chris Stevens, will be visiting and staying at a nearby compound. The date is September 11, 2012.

Inspired by, and based on the stories of, several of the contractors that endured 13 hours of hell, “13 Hours” ranks with “Platoon” as a true depiction of what war really is. As the film begins we meet our heroes: Jack Silva (Krasinski), a real estate agent back for a much needed payday; Tyrone “Rone” Woods (Dale), a grizzled veteran of over a dozen missions hoping to make a better life for himself and Mark “Oz” Geist (Max Martini), a hulking man with a kind heart. With their fellow “brothers” they are prepared for anything and everything. Nothing is easy in Libya. Not going for a ride or taking a short walk. They share their duties with members of 17 Feb, an Islamist group that took up weapons after the fall of Gaddafi in hopes of saving their country. However, in a country where automatic weapons and rocket launchers have replaced vegetables at the outdoor market it’s hard to tell who your friend is and who your enemy is. Especially when your “friends” are “making $28.00 a day and have to bring their own bullets.”

Hats off to the cast. They were instructed by either their real-life counterparts or those that knew them and, like Bradley Cooper’s Chris Kyle in “American Sniper” or Mark Wahlberg’s Marcus Lutrell in “Lone Survivor,” they strive for realism in honoring the men they are playing. In fact one of the men, Glen “Bub” Doherty, was close friends with Brandon Webb, the sniper who trained both Kyle and Lutrell. There are no phony heroics here. War is scary as hell and the cast makes sure that mask of horror is front and center.

While the camaraderie of the men is the message of the film, it is the amazing 13-hour battle which is what you will remember. Each round of fighting, escalating and easing up, only to get steadily worse as the night goes on, is a nail-biting, edge-of-your-seat moment. And kudos to director Bay for not making this a typical “Michael Bay” film. There are no shots of men walking in slow motion through a cloud or fog. In fact, there is very little use of slow motion here at all. Only when he cribs the “money shot” from “Pearl Harbor”, following a mortar shell from the sky and all the way down until it hits its target, does he seem to be going for a little flash. Bay also leaves out a lot of the unnecessary politics that still surround this event. If there is fault to be assigned, there is plenty to go around, and Bay allows you to make up your own mind as to who to point your finger at.

One Reply to “Film Review “13 Hours: The Secret Soldiers of Benghazi””