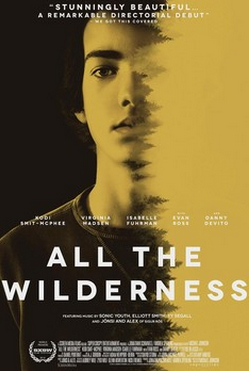 James Charm (Smit-McPhee) would easily be labeled the “weird” kid if you didn’t know him. Since his father’s death, James spends the majority of his time in his room, listening to Chopin and reading Melville and Sandburg. He also seems to have picked up a pre-occupation with death, from the family hamster to a schoolmate, who punches James in the face after the boy predicts the day and time he will meet his maker. James is seeing a sympathetic psychiatrist (DeVito) at the request of his mother (Madsen) but he doesn’t seem to be making any progress. However, a chance meeting and a night time bus ride will soon bring James back into the world he’s trying to escape.

I’m giving a little leeway here because “All the Wilderness” is a first time feature by screenwriter/director Johnson. There is a lot going for it, but also some things going against it. On the plus side, the film is rich with strong performances, especially the younger cast members. James wears his weariness like a badge and Smit-McPhee perfectly embodies a young man growing up lost without a father to guide him. His fellow youthful co-stars are equally strong. Isabelle Fuhrman is Val, the chance meeting that manages to bring a little sunshine into James’ life. As Harmon, James newfound friend and influence, Evan Ross also manages to help put a smile on James’ face. Of course, life isn’t all rainbows, but when the storms come the three manage to explore them without falling into a stereotypical fracas. On the negative, only the younger characters seem to have been completely drawn. Madsen is wasted as a mother whose only scenes seem to be of her drinking wine and scolding James. You can sense the love underneath the performance but she’s not given enough to push it to the forefront. DeVito has a few good moments but his character comes across as the standard Judd Hirsch/Robin Williams shrink everyone expects anymore. Another detriment is the running time. You have to make sacrifices as a first time feature filmmaker and I wonder if there was more to be added.

As a filmmaker, Johnson has an experimental way with a camera that shows promise for the future. He also manages to make the nightlife of Portland, Oregon (thank you, Food Network, for your many journeys to VooDoo Donuts, which I recognized on screen) look exciting! I will certainly be keeping an eye out for his next project.