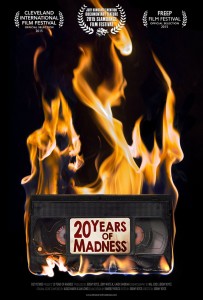 “20 Years of Madness” is a look back at a local cable access show that aired in the early 1990’s in Michigan called ’30 Minutes of Madness’. It was “Jackass” meets “Tom Green” before either of those shows existed. “30 Minutes of Madness” was written, produced, directed, and starred a group of teen-age friends whom all came together to create madness and insanity, and recorded it on VHS, then put it out for public consumption.

The show was created and overseen by Jerry White Jr., a talented writer/director with a few anger issues. Very controlling and not open to other people’s input, the show hit well with a local audience, but fell apart when tempers would rise as each show was made, and slowly the friendships of those involved broke apart.

Twenty years later Jerry White Jr attends his twentieth high school reunion and uses the opportunity to reach out to those friends, to come back and make one more episode of “30 Minutes of Madness.” Having crowd-sourced funding to make the episode, Jerry returns to Michigan, rents a house, and collects all the previous cast members that he can. From here we see just how much twenty years can change people, and how grudges can remain.

What I really liked about this documentary was that it is extremely honest. You are able to openly like and dislike everyone involved. It doesn’t arbitrarily paint anyone in an unfavorable light, although quite a few of them are behaving in ways that make them hard to care about. But in the end: you do.

“20 Years of Madness” is about that teen-age sense of invincibility. Feeling that you have the entire world within your grasp, and that you can do anything. It’s about doing whatever you want whenever you want as a teen-ager because you can’t see the future repercussions. It’s about ego driving out rational thought, and tempers flaring over art that ruins friendship. It’s also definitely about dreaming larger than what you have the ability to create on your own. Then realizing you have to looked past yourself and ask for forgiveness and for the help of others.

“20 Years of Madness” isn’t about two decades of insanity captured on video; it’s about anger between people whom were once friends trying to come back together and reclaim that sense of innocence and fun that they lost. Director Jeremy Royce has crafted a great story out of the very interesting person that is Jerry White Jr. The film is very well-balanced, and is worth seeing in the theatre.