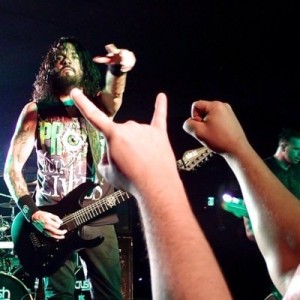 Tommy Victor is the lead singer/guitarist for the heavy metal band Prong. The band has been pummeling people’s ear drums since the late 80’s and has recently released an album of cover material titled “Songs From the Black Hole”. The album is a throwback to the bands early roots based in the NY/DC Hardcore scenes and consists of tracks by bands such as Discharge, Killing Joke and Bad Brains. Media Mikes had the chance to talk with Tommy recently about the album and the bands plans for the upcoming tour season.

Adam Lawton: Can you give us some background as to why you chose to release an album of covers as opposed to an album of new Prong material?
Tommy Victor: We put out a traditional release not too long ago titled “Burning Alive”. We did a lot of touring around that last year which didn’t leave a lot of time to go in and do an actual studio record. We had some time off in Berlin during a festival tour run so instead of sending everyone home we had though to maybe start working on new material however my manager mentioned the idea this covers album to put out via sound cloud or something like that . I knew it would take a little bit of work but as I started investigating which songs to do I started getting more excited about it. By the time we went in and cut the record a lot of the songs had really great arrangements. Jason Christopher and I picked most of the songs and the initial rehearsal session went so well that we decided to get the label involved. It started as this small thing just to kill time but everyone got real excited about it. It was very natural and nothing was forced. That seems to be the way Prong has been rolling these days.

AL: How did the song decision process work between you and Jason?
TV: I had talked to a couple of old friends from back in the day in New York just to be reminded of where we came from a little bit. That was the frame work for a lot of this. Jason knowing that was able to compile a nice list of songs and I supplemented that with a couple of other songs but he pretty much nailed it. Knowing my vocal style and from talking with me and some friends the selection process wasn’t that difficult. We knew we wanted a Black Flag and Discharge song on there and to do a Killing Joke song was obvious. They are my personal favorite group of all time. Bad Brains is another band that influenced not just Prong but countless other bands and music styles. A lot of the choices were very obvious. The Neil Young song is the one that is much different from the rest. We wanted a longer song that could expose our simplicity while still getting a point across. It’s one of Neil’s songs that has been noted as having a good guitar solo so I wanted to try and tackle it and challenge myself. Having a love for all of these bands I think made things come together very nicely.

AL: Was it a conscious decision to do more obscure tracks as opposed to some of the bands better known songs?
TV: A little bit. There were a number of songs mentioned but some of them just seemed too typical. For example I am a fan of the later Black Flag albums which are often ignored but they are albums that influenced me. “The Bars” was the song we ended up choosing from them as it fit our style. There were countless Killing Joke songs we could have done but we chose “Seeing Red” and then for Husker Du we chose probably their most popular song “Don’t Want to Know If You Are Lonely”. There really wasn’t any specific formula for the song selection.

AL: Were there any songs you guys did that didn’t make the album? 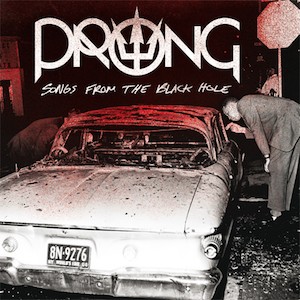 TV: There were a couple that I personally liked but they didn’t have as much connection to Prong as the ones that did make the album. We didn’t want to mix in the metal influence with this album as it’s a whole other ball game. There is a definite theme with the NY roots and some of the other songs just didn’t fit with the specifications we set. We wanted to make sure this wasn’t just a hodgepodge of songs and that each song meant something to us and was something that influenced Prong and/or our sound.

AL: The album has some pretty unique artwork. Can you tell us a little bit about that?
TV: Initially there was a guy in Berlin who had been doing a lot of our t-shirts and such however he wasn’t available for this project. I mentioned Mike Lopez to the label and told them I already had a bunch of ideas for how I wanted the cover took look. He took those ideas and came up with a great package. It was a process as we exchanged ideas back and forth for a few weeks. I wanted the artwork to reflect the origins of Prong and where we came from in the Lower East Side of Manhattan. That is a place that doesn’t really exist anymore. We came from this rat infested, party atmosphere where everyone just went crazy. That whole area has changed now but when we were growing up there it was a lot of violence and crime. It was very chaotic. Mike took all that stuff and put it together into what you see on the cover of this album.

AL: What type of tour plans are you planning in support of this release?
TV: We have a tour scheduled for Europe in the coming weeks. After that we have a very large tour set for the States starting in October. To get all the dates people can check out www.prongmusic.com