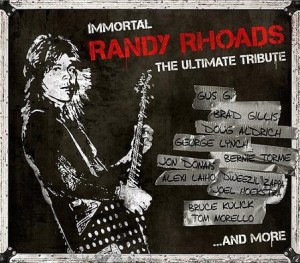 “Immortal Randy Rhoads- The Ultimate Tribute” is a collection of 11 classic Rhoads co-written songs. Twenty top contemporary artists including old friends and former band mates make up the roster of performers and include Serj Tankian, George Lynch and Frankie Banali to name just a few. Produced and compiled by Grammy Award winning producer Bob Kulick the album certainly lives up to its title.

Right off the bat fans are greeted with what is undoubtedly Randy’s best know track, “Crazy Train”. Helmed by System of a Down” Front man Serj Tankian and former Rage Against the Machine guitarist Tom Morello along with Rudy Sarzo and drummer Vinnie Appice the track remains virtually unchanged with the exception of Morello’s signature toggle switch stutter solo which certainly gives a modern day feel to a staple in guitar wizardry. Chuck Billy steps in lending his growling vocals to “Mr. Crowley” while Children of Bodom shredder Alexi Laiho lays down some flawless solo work that could easily be confused for the original.

This is not just another tribute album made up of the most well know songs of Randy’s career as it is much more than that. Songs such as “Back to the Coast” and “Killer Girls” originally performed by Quiet Riot appear on this album as does the song “S.A.T.O.”. A deep cut from Randy’s Ozzy era material. As if the star studded line up was enough these three songs alone will have music fans clamoring for a copy of this album. Grammy Award winning producer Bob Kulick lends his production stamp to this release further solidifying that this release is worth its weight in gold.

If you still need further proof that this is not just another fly by night tribute release then how about the fact that Randy’s own brother Kelle Rhoads appears on two of the albums tracks! Randy is often imitated however never duplicated but if he could be “Immortal Randy Rhoads- The Ultimate Tribute” is the closest yet.