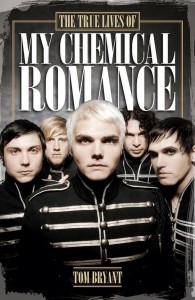 “Not the Life It Seems: The True Lives of My Chemical Romance” is the story of how a band defied stereotypes and championed uncomfortable subjects. Through unorthodox vocals and stage performances My Chemical Romance helped address often controversial topics head on. Journalist Tom Bryant recounts how the bands personal experiences resulted in some of their biggest hits. Bryant looks at the bands growing success over its four albums and the bands subsequent breakup in 2013. The book delves in to each member’s personal history leaving no stone unturned.

Over the books 384 pages Bryant chronicles the band’s various struggles with addiction, media exposure and issues between the group’s members. With a lot of these stories being told for the first time there was certainly a lot of info included that peaks the reader’s interest to further delve in to the following chapters. The biggest thing that kept weighing on my mind while reading this book was the fact that these stories were being told from an outside source and compiled from a number of unpublished interviews. Now I am certainly not discrediting the authors work however I think the book would have had a more personal feel if it was told via the band members directly and not via an onlooker.

Very seldom do I find biographies of this nature to be as telling as they could be when the actual players are not directly involved. However fan’s of the band will want to check the book out as it does give a fresh look on the events surrounding the groups break up. The book also includes some interesting black and white photos of the band which are worth checking out on their own.