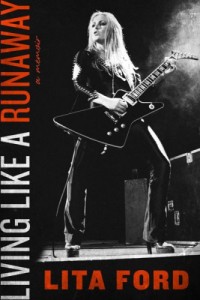 “Living Like a Runaway” provides a never before glimpse into the life of musician Lita Ford. The child of immigrants, she had a near idyllic southern California upbringing until she was thrust onto the hedonistic rock and roll scene at the age of just 16. With nearly unmatched skills, Lita along with Joan Jett, Cherie Currie, Sandy West, Jackie Fox and under the guidance of Kim Fowley brought the band the Runaway’s to a meteoric rise during the mid to late 1970’s. After the groups break up Lita go on to see tremendous success as a solo artist in the 1980’s. Fearless, revealing and, compulsively readable the long awaited memoir from a true rock pioneer is finally here.

“Living Like a Runaway” is a quick read that keeps the reader’s attention over the course of its 272 pages. Ford speaks candidly about her upbringing and how she was thrust at an early age in to the male dominated hard rock music scene. The book covers the early days of the Runaway a group who had to practically fight for everything they had before ultimately imploding after only 3 albums. From there Ford recounts her career as a solo artist from not knowing where to start to her chart topping duet with Ozzy Osbourne. It is all here. The part of the book that really struck me as odd as over the books 15 chapters Ford has no problem speaking of past sexual encounters with various hard rock legends however when it comes to explaining more of her issues related to former band members and the divorce which left her alienated from her two sons Ford quickly skirts around the issue either saying she doesn’t understand or in the case of the later includes a statement flat out saying she is refusing to talk about it. In the age of the internet where nothing is private what is the sense of putting out a “tell all” type memoir if that’s not exactly what you are going to do? At least you are able to tell your side.

Despite whatever the reasons were for omitting certain details the book is still a decent read for fans of Lita and her works. With not a lot of behind the scenes info on the Runaway’s especially there time in Japan, Lita Ford’s “Living Like a Runaway” does an ok job filling that void.