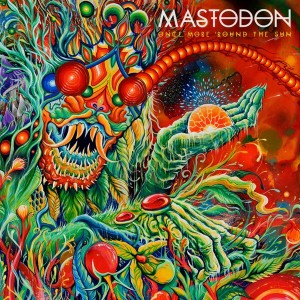 Don’t let the opening seconds of “Tread Lightly” fool you. While the acoustic guitar may lull you into a state of peace, the heavy guitar licks that Mastodon have meticulously churned out for over a decade lurk around the corner; ready to pound and enchant. “Once More ‘Round the Sun” pushes Mastodon farther from their murky sludge metal roots, but progresses once again into a more experimental sound that showcases their ability to mold, but remain durable to their changing appetites.

Lately Mastodon has created an accessible, mainstream appeal while continuously maintaining that heavy metal template they implemented back in 2002. “Once More ‘Round the Sun” is their most melodic release to date and solidifies the fact that Mastodon is still successful when sailing into uncharted territories because they never stray too deep. While remaining diverse, they’re still nestled into their own sub-genre they’ve seemingly created in a myriad of metal categories by blending thrash, doom and a stray pinch of alternative.

On their sixth studio album, they appear to be perfecting their guitar structuring and resurrecting more of their haunting hooks on solos. The drumming continues to be unpredictably manic and catchy, while the vocals have traveled into cleaner territories and set up camp. Straying away from the growls has big one of the biggest complaints over the years by fans, but this path has led to a more popular tone that’s more approachable to audiences. Mastodon has enlisted Nick Raskulinecz as producer to help craft a hard rock sound that slyly pays homage to some of the early 90’s rockers that were birthed during the post-grunge era. “Once More ‘Round the Sun” is commercially acceptable without forsaking any of the originality Mastodon has long cherished.

The track “Motherload” encompasses this album’s direction while “Chimes at Midnight” steps back into the ferocious sound that Mastodon has riled up crowds across the world with. Their hunger for experimentation is heard most in “Aunt Lisa”, a trippy song that fluidly changes tempo and cheerfully climaxes on a gleeful pep rally chant by the Coathangers. Every song has an epic flair built up by simplistic yet powerful choruses and juicy riffs that induce head bobbing. Mastodon is still a relentless beast that craves inventiveness with every evolution.

I’ve told people this Mastodon’s “Crack the Skye”: They are no longer a band for metal masses, but instead a treat that should be enjoyed by everyone who’s ever loved music; a possible gateway drug for someone looking to dip their feet into metal music. Mastodon’s expanding sound prevents them from being mundane, but it’s slowly filling a worrisome thought bubble in my head. I have to ask myself after another successful outing, when will Mastodon finally peak and release a bloated mess that’s unbecoming of their usual, beautifully woven metal masterpieces? If “Once More ‘Round the Sun” is any indication, it’s not anytime soon and it may never happen.

1. Tread Lightly2. The Motherload3. High Road4. Once More ‘Round the Sun5. Chimes at Midnight6. Asleep in the Deep7. Feast Your Eyes8. Aunt Lisa9. Ember City10.Halloween11. Diamond in the Witch House