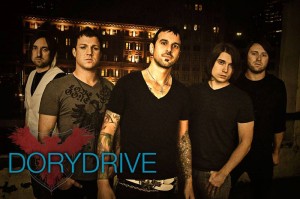 Mathieu Nevitt is the lead vocalist for the MidWest based rock group DoryDrive. The group has just released their debut full length album titled “Here’s to You” via First Launch Records and the single of the same name is currently working its way up the rock charts across the country. Media Mikes had the chance recently to talk with Mathieu about the group’s formation and the recording process for the new album.

Adam Lawton: Can you tell us about the formation of the band?
Mathieu Nevitt: The band was started out of me joining a preexisting band that the rest of the guys had performing with for quite some time. My previous band Echovalve was touring with them and we were both looking for something different. I wasn’t interested in joining something that had history already nor was I looking to do heavy music. We ended up coming together to start DoryDrive which is a departure from the guy’s previous material but I think we are all happy with what we are doing now.  From there we started recording together as a band in Nashville, TN. After a couple recording session there we though it would be cool to name the band after the street that the studio was on.

AL: What can you tell us about the group’s new album?
MN: The album is titled “Here’s to You” and working on the album was a very enjoyable process for us. We got to work with two different producers which was really cool. We were able to grow with our music and as a band I think that is what really gave us a chance to strength our bond. We like to have a good time when were in the studio and the writing process was a lot of fun.

AL: Was it difficult in any way working with two different producers?
MN: They each had their own philosophy. The guy we worked with in Nashville was much more militant about the guitar sounds. When we started working with the other producer who helped finish the record things felt much more inviting which I feel was beneficial. Both instances were beneficial for us but we really opened up more towards the end of the process. 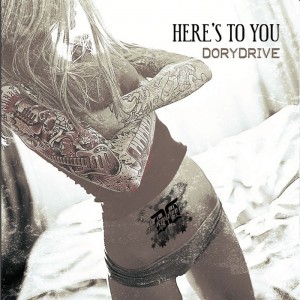 AL: Can you tell us a little bit about the two music videos which have been released thus far?

MN: That’s a love/hate relationship for me. Shooting these can be very hectic and you never feel like you have enough time to do everything. There is always a question mark surrounding things. You just have to not second guess yourself and do whatever it is that needs to be done. The newest video is for our single “Here’s to You”. I was really happy with how it turned out and I think we are growing in front of the camera each time we work on a new video.

AL: Can you tell us about the bands current tour?
MN: This tour is our headlining tour. We will be following the radio markets that have picked up our single recently. We will be utilizing that radio play and our promotions company to really hit as many places as possible. We are also actively pursuing some other options as well for when this run of shows end. We are hoping to jump on a really great tour this summer.