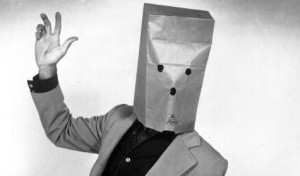 Here’s my Murray Langston story. When I started out in the theatre business one of my responsibilities was to put the new films together and watch them to make sure they were ok. One Friday morning I came in to assemble and screen a film called “Night Patrol,” that Mr. Langston not only co-wrote but starred in, both as Officer White and the Unknown Comic. As the film started I began to panic, as the opening credits were in French and subtitled. After a few moments I ran to the office and called the film company, screaming at them that they had sent me a French print. Thus began a scramble at New Line which ended when one of the film people in the office, who had seen the film, notified his bosses that the filmmakers intentionally put the opening credits in French and assured them, and me, that the film was in English. And it was. Ha-ha on me! And the many people that would come out of the theatre wanting their money back because they didn’t know “Night Patrol” was a foreign film.

Born in Canada, Murray Langston always had a knack for being funny. After entertaining his fellow sailors while working as a disc jockey in the Navy, Langston ended up in California, where he made his professional debut on “Rowan and Martin’s Laugh In” doing his impression of a fork. He eventually earned a gig as part of the supporting cast of “The Sonny and Cher” show. But he shot to fame when he put a paper bag over his head and appeared as the Unknown Comic on “The Gong Show.”

In the almost four decades since he slipped that bag over his head he has not only continued to entertain but has helped nurture some of the greatest comedians of his, and our, era. To promote his new book, “Journey Thru the Unknown,” Mr. Langston sat down with me to talk about his career, his influences, and his two beautiful daughters, of whom he is immensely proud. After I regaled him with the above “Night Patrol” story, which he enjoyed, the questioning began in earnest. I should add hear that Murray Langston is always “on” and never misses an opportunity to make you laugh.

Murray Langston: Where are you calling me from?
Mike Smith: Kansas City.
ML: Oh…I’ve heard of it.
MS: I’ve got four or five questions whenever you’re ready.
ML: I tell you what….you’ve got six. And you can’t ask me what the capital of Ohio is.
MS: That was actually my follow up to the first question.
ML: (laughs). Good one. Don’t ask me the distance from the sun to the moon either. Don’t know it.

MS: For those who haven’t read the book yet, tell us a little about what led you into show 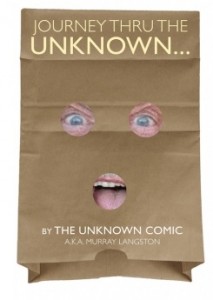 business.
ML: Two words. Jerry Lewis. He’s what led me into it. Sitting in the theatre as a kid and watching those movies. I knew that’s what I wanted to do. I think he also inspired Steve Martin. He inspired a lot of people. And I’m so grateful because I’ve had a wonderful life…and am still having a wonderful life.

MS: That’s all that matters.
ML: Exactly. I’m enjoying every minute of every day.

MS: You are originally from Canada, which has also given us great comic minds like Dan Aykroyd, Mike Meyers, Jim Carey. What is it about Canada that makes people so funny?
ML: I don’t know. Maybe it’s the cold weather. We just wanted to get out of there and comedy was a good way to do it. You know, when you do shows in Canada the people aren’t really applauding, they’re just trying to keep warm.

MS: I can’t think of anyone that has an appreciation of comedy that doesn’t know of the Unknown Comic. When you would do your live shows you would open as the Unknown Comic and then, after a break, would return to the stage as Murray to finish the act. Were there any bits you felt more comfortable doing as the Unknown Comic rather than as Murray or vice versa?
ML: Not really. The Unknown Comic was more a visual act. I’d do impressions with the bag or magic tricks. Really, except for a few one-liners all of the jokes as the Unknown Comic were related strictly to the bag. Once I took the bag off it was a completely different show because I would talk about things that were happening in my own life.

MS: The book has a great collection of photographs. I think a lot of the people that read it are going to be shocked because they’re going to recognize you instantly by your moustache and realize you entertained them on many, many sketch comedy shows. Do you have a favorite guest star that you worked with on these shows?
ML: Obviously a huge moment for me was when I got to work with Jerry Lewis on “The Sonny and Cher Show.” That show was four and a half great years. I mean I got to meet everybody. From Ronald Regan to O.J. Simpson. All of the great musical acts that came along back then. “The Sonny and Cher Show” is definitely a highlight of my life.

MS: You mention often in your book the influence Jerry Lewis had, not only on you but on so many other comedians. Is there another comic actor around these days that you think could be referred to as having achieved “Jerry Lewis” status?
MS: You know who almost did that…Jim Carey, who I worked with a couple of times in Canada. I would say that he came pretty close to it for a few years. I’m one of those guys that, whenever somebody can get up on a stage and make people laugh for 45 minutes or an hour, I’m going to appreciate them because I know what it takes to do that. I really like Louis C.K. In fact, someone told me that he’s said he only became a comedian because of the Unknown Comic…because of watching me in his early years. I love his work. I love a lot of people’s work. Like I said, anybody that can do it I’m a fan of.

MS: I’ll understand if you can’t answer this one. Did you ever go on a secret mission with Chuck Barris when he was with the C.I.A.?
ML: (laughs loudly) Yes. No, Chuck told me that when he was writing the book he thought it came off as boring so he paralleled his true life story with a fictional one just to make the book more entertaining. And it certainly worked. It made for a good movie. But none of that stuff was true. And I hope people know that now.

MS: Finally, as you approach age 70 you’re still going strong. What do you have coming up?
ML: I just finished a play. And I’m getting ready to perform at the Wolf Trap Theatre. Is that in Vermont?

MS: Virginia. It’s very nice.
ML: I have a couple more joke books coming out, plus I currently doing the audio verison of “Journey Thru the Unknown.” I’ve got a joke book about Donald Trump and another one about the Kardashians, so I’m always busy. Plus I’m always looking out for my two daughters. (NOTE: Mr. Langston has two daughters: Myah, a singer/songwriter and Mary. Mary has Down Syndrome and is truly the light in her father’s life) My oldest daughter (Myah) just signed with Capitol Records and has a record coming out soon. They’re going to be HUGE! Her band is called My Crazy Girlfriend. And it’s really interesting. I wrote in my book how my influence was Jerry Lewis and the next thing I knew I was working with him. From the time Myah was 8 or 9 years old she was a huge fan of Brittney Spears. She idolized her. And now she’s been a back-up singer on her last three albums. That’s an interesting parallel, I thought.
MS: How is Mary?
ML: Mary is doing great. She’s the joy of my life. I’m picking her up from school and she’s spending the weekend with me.

MS: She’s an angel.
She is my angel. She makes my life worth living a hundred times more.