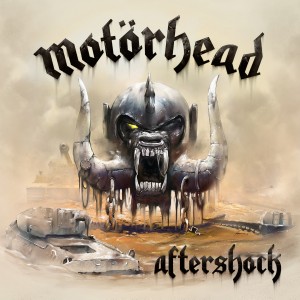 “Aftershock” is the latest release from heavy metal heroes Motorhead. The 3 piece group which has been making heads bang since 1975 are back with their 21st release. Simply titled “Aftershock” the album incorporates Lemmy and company’s standard blitzkrieg approach with elements of rhythm and blues which takes the listeners senses on a musical marathon. Produced by Cameron Webb the album features 14 brand new tracks which are welcome additions to the always growing Motorhead catalog.

From the word go “Aftershock” hits the ground running and doesn’t stop until well after the finish line. The album kicks off with the adrenaline fueled “Heartbreaker” which gives way to songs like “Lost Woman Blues” which features a groovy blues feel before the album catapults you back to reality with songs like “Do You Believe” and “Queen of the Damned” before wrapping up with the four on the floor rocker “Paralyzed. Each of the members of Motorhead seem to only get better year after year and despite bassist/vocalist Lemmy Kilmister’s recent health scare the band shows no signs of slowing down any time soon. Veteran producer Cameron Webb continues to do what he does best as he is able to capture of nuance of the bands signature sound.

Though “Aftershock” might not be in the same league as albums like “Ace of Spades” or 2000’s “We Are Motorhead” but it’s certainly pretty close. Long time listeners and frequent Hot Topic shoppers were definitely want to give this album a listen.