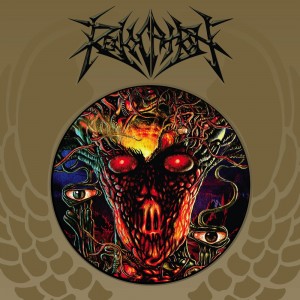 Boston, Mass. natives Revocation are back with a brand new full length album titled “Revocation” The album which is being released via Relapse Records is the follow up release to the bands 2012 EP titled “Teratogenesis”. “Revocation” features 10 brand new tracks that were produced by Peter Rucho. Probably the bands most ambitious release yet “Revocation” fires on all cylinders and delivers nothing but death metal goodness over the course of the albums 10 tracks.

The albums opening track “The Hive” goes straight for the jugular both instrumentally and lyrically. “Arch Fiend” continues the albums break neck pace and features a really cool acoustic interlude which was the perfect transitions to the songs outro solo. The song “Fracked” was a person favorite of mine as it featured some interesting note choices and the lyrics seemed to poke fun at the often controversial subject of fracking. As the album works its way to a close you are blasted with the track “Invidious” which features several blazing banjo iriffs. Yes that’s right death metal banjo music! These little sections are what make this album really fun and unpredictable as you just never know what may be around the next corner. The album ends on a thunderous high note with the song “A Visitation”. Great instrumentation and vocals make this a solid track to end on as definitely made me want more.