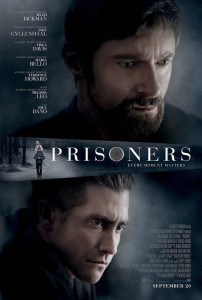 Keller Dover (Jackman) is a hard working family man. He does his best to provide for his family: wife Grace (Maria Bello), son Ralph (Dylan Minnette) and young daughter Anna (Erin Gerasimovich). He does his best to protect his family as any father would. This Thanksgiving they are visiting their neighbors, Franklin and Nancy Birch (Terrence Howard and Viola Davis), and their children. Anna and little Joy Birch (Kyla Drew Simmons) ask if they can go to the Dover home. Keller tells them to make sure they take one of the older kids with them. Lesson one, kids: always listen to your parents.

Directed with the skill of a master, “Prisoners” is the best thriller to come down the pike in a decade. The credit here is three way. First, an almost flawless first time original screenplay by Aaron Guzikowski, whose only other writing credit was for his adaptation of the Icelandic film that became the Mark Wahlberg hit “Contraband.” Second, the outstanding direction of Canadian filmmaker Villenueve. Villenueve, an Academy Award and BAFTA nominee for his 2011 film “Incendies,” delivers one of the greatest Hollywood debuts I can remember in recent history. Thirdly, a cast of past Oscar nominees and winners that deliver some of the best work of their careers.

Jackman, an Oscar nominee last year for “Les Miserables,” digs deep into the darkest portion of his soul in order to give Keller both the rage that you fear and compassion that you admire. When the police arrest, and then release, a man they suspect of the crime (Paul Dano), Keller and Franklin abduct him and keep him prisoner, beating the hell out of him in the hopes that he’ll tell them where the girls are. On the side of law and order is detective Loki (Gyllenhaal), a man with obvious demons of his own. His neck covered in a tattoo that resembles a badge and his face a non-stop series of tics, Gyllenhaal gives the performance of a career here. He and Jackman are matched by Dano (“There Will Be Blood”) as a quiet kid that may or may not know the girls whereabouts. As the neighbors who are also mourning the disappearance of a child, former Oscar nominees Howard and Davis display a quiet dignity that you would expect from a couple under those circumstances. As the hunt for the girls continue Keller becomes less and less patient with his captive, doing whatever he feels is necessary to get the answers he requires.

Villenueve crafts and molds the story into a thing of beauty. His pacing is brilliant, giving the audience just enough clues to keep them guessing at every twist and turn. Is Dano the man responsible? Or is he just the type of misunderstood, quiet young man whose very reluctance to speak paints him with the brush of guilt? You’ll have to see the movie and learn those answers for yourself?