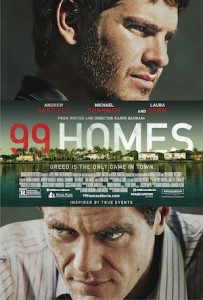 Rick Carver (Shannon) casually stares at the corpse of a man who has just committed suicide. His look of disgust isn’t because of the blood or gore he’s staring at, but how much it’s going to cost to clean it up. Carver is the embodiment of the greedy industrialist stereotype we’ve come to expect in movies, but there’s something more to Carver. He’s covetous in a very threatening way, but once that icy stare of his fades away, there’s an understandably human side to him.

Carver expertise is real estate. He’s found out every backhanded way to make money off the company he represents, the U.S. government, and the people he’s foreclosing on. He’s sadistically smart on how he handles himself in front of people he’s evicting. Everything he says is cold and calculated. Shannon brings an air of hostility to Carver without having to raise his voice. He also knows that what he does makes him hated. So he conceals a firearm, ready and willing to get it out if need be.

The latest person to cross an unfortunate path with Carver is Dennis Nash (Garfield). He’s a home builder by trade, but he’s without any homes to build in the Florida landscape. He lives in his childhood home with his mom, and his only son. Nash is the only legitimate revenue stream since his mom simply cuts hair out of their home. Nash is out of options, legally and financially. That’s when Carver comes knocking. Carver has an answer for all of Nash’s tears and angry outbursts as he has only two minutes to pack up everything and get out.

Nash is a guy who’s made a lot of bad choices and good luck has stayed far away from him. So it’s very ominous when Carver offers Nash some cold hard cash to clean out a home. The hardworking skill that Nash displays impresses Carver. Carver formulates a plan in his head, which “99 Homes” slowly reveals. Carver’s motives are inherently selfish, but reasonable. So Carver offers Nash more and more jobs, and sadly, Nash believes he has finally came across the good fortune that’s alluded him for long Nash’s reasoning for working for the man who kicked him out of his home is clear, he wants to create a comfortable life for his son.

“99 Homes” is the best performance I’ve ever seen from Garfield and it’s equally matched by Shannon, who’s displayed this kind of acting prowess in the past. Shannon and Garfield masterfully display their characters true nature through body language and without uttering a single word. Laura Dern adds to the mix with her performance as Nash’s mom. There aren’t any other standouts in terms of acting in “99 Homes”, but being able to watch Garfield match the performance he did in the “Social Network” is refreshing after the unwanted Spiderman movies.

Writer and director, Ramin Bahrini, provides a riveting story, albeit one that feels a bit stale. I’m not saying that there aren’t people like Carver still lurking around, but this feels like a story that would be more interesting right after the 2008 house marketing crash. What Bahrini does do to keep “99 Homes” from simply being an outlet of social commentary, is pump up an engaging drama with relevant dialogue. While the housing market crash will inevitably be a thing of the past, “99 Homes” finds a more intriguing story in how the incorruptible can be corrupted and how the corrupted are looking for a little virtue to hang their hat on.