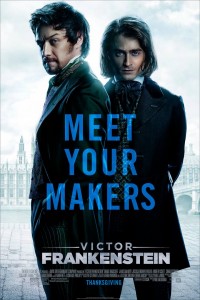 As I type this, we are 24 hours away from a marathon of Thanksgiving food, watching the Detroit Tigers lose, and tolerating relatives we rarely see. The last thing that feels remotely like the holidays is a movie about Frankenstein and his monster. But “Victor Frankenstein”, seemingly scared off by the month prior and all the competition, is out before the holidays to bore audiences instead of terrifying them.

It’s disheartening to see good actors in subpar movies and “Victor Frankenstein” has roped in Daniel Radcliffe and James McAvoy. Radcliffe plays Igor, who in this retelling is a hunchback because of a enlarged cyst and works in the circus because of his deformity. He has a bizarre and natural knack for medicine and human anatomy. How the picked on “creature” at a circus learns to pop a broken collarbone back into place is beyond me.

This unnatural habit is viewed by Frankenstein, played by a scene chewing James McAvoy. This version of Frankenstein is more like a young kid who had way too much fun making disfigured monsters in his little sister’s Easy-Bake Oven than a mad scientist. While Frankenstein attends school and plots out bringing the dead back to life, Igor, who does not attend school or intends to raise the dead, consistently corrects biological and neurological mistakes that the alleged science student makes.

Stumbling into the picture and further complicating matters is an overzealous, literally and metaphorically, detective and an old crush that Igor has. The eye candy of “Victor Frankenstein” is supposed to spark some humanity in Igor’s character, but it bogs down the pace of the movie instead. As for the detective, he constantly twirls a necklace cross in between his fingers, delivering Sunday sermons when he condemns Frankenstein. It’s the movie’s attempt at stating morals on science, life, religion, and the lines in the sand drawn between them.

But what the writers and director of “Victor Frankenstein” don’t understand is that every theme and bit of morality is in Frankenstein and the inevitable monster he creates. The monster in this doesn’t appear until the end and the big twist on the monster is lame, no matter how much scenery McAvoy chews up and spits at the audience. The values and ethics of the movie are too jumbled for anyone to feel any sympathy.

Much like Mary Shelley’s monster that was created in 1818, this possible reboot is just as cold and lifeless. The reimagining, the retelling, and re-anything needs to stop in Hollywood. “Victor Frankenstein” feels like “Sherlock Holmes” met “Dracula Untold” and couldn’t decide on how to balance the stupid and action in the movie. If you’re looking for a way to punish your relatives for their company this holiday, look no further than “Victor Frankenstein”.