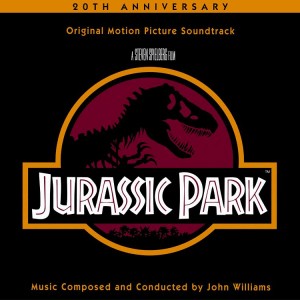 With Universal Pictures re-releasing Steven Spielberg’s “Jurassic Park” in 3D on April 5, 2013 and word of a greenlit “Jurassic Park 4”, who isn’t thinking about this film. It is not even mentioned or advertised that this is also the film’s 20th anniversary on the promotions of the film. John Williams’ score for “Jurassic Park” was always one of my all-time favorite score…and now it sounds ever better than it ever has. Universal Music Enterprises is behind this digital release with newly remastered music from the film, as well as four bonus tracks. Can it get any better than that? Answer is NO! This score has always sounded amazing but they really amped it up for this new digital release.

The new tracks including “The History Lesson”, “Stalling Around”, “The Coming Storm” and “Hungry Raptor”. They are honestly worth the purchase alone of the CD. They were personally chosen by Williams along with his music editor, Ramiro Belgardt. They went through the master tapes of the film to find new cues that were not released on the original album. How much of a treat is this?. Getting a chance to hear some new Williams compositions from this film is just amazing. The new tracks also feel like they fit right in with the film as well. This is the first time that they are being released for sale. “Jurassic Park” is also part of history since it marks another amazing score from his outstanding 40-year collaboration with Steven Spielberg. I hope he is planning on scoring “Jurassic Park 4”.