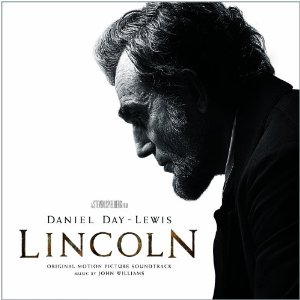 “Lincoln” is composed and conducted by the legendary John Williams, also long time collaborator with Steven Spielberg. I feel that the album really captures the essence of the movie. It is also performed by the Chicago Symphony Orchestra. Overall the score itself is very simple, quiet and packs a hell of a finale running 11 minutes. Though within that quietness it has this very epic and inspiring feel. Of course there is also the classic call of music from the period like the drums and fiddle of the Civil War. I did feel like getting up saluting and marching throughout a few tracks.

This is actually the 40th anniversary of duo working together if you can believe it. I have been a fan of Williams’ score and his notable signature is found all over this score for sure. “The Race to the House” contains excerpts arranged and performed by Jim Talyor and is a fun track. “With Malice Toward None” is another great track but I really have a sweet spot for the last track, which is a very sharp piano solo of the track. In another plus, the booklet on the CD really tells a story in itself.  It comes stocked with wonderful shots from the film, as well as a really nice and informative foreword from Steven Spielberg. Overall “Lincoln” is yet another successful collaboration with Williams and Spielberg.  This one will surely spend a few months on my iPhone.

Track Listings
1. The People’s House
2. The Purpose of the Amendment
3. Getting Out the Vote
4. The American Process
5. The Blue and Grey
6. “With Malice Toward None”
7. Call to Muster and Battle Cry Of Freedom
8. The Southern Delegation and the Dream
9. Father and Son
10. The Race to the House
11. Equality Under the Law
12. Freedom’s Call
13. Elegy
14. Remembering Willie
15. Appomattox, April 9, 1865
16. The Peterson House and Finale
17. “With Malice Toward None”(Piano Solo)