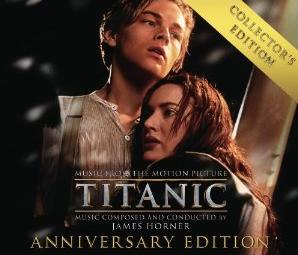 With the commemoration of the 100th anniversary of the Titanic launch and the 15th anniversary and re-release in 3D of James Cameron’s film, I can’t seem you get enough of “Titanic“. It is one of those movies that once you start watching you are hooked. The same goes for the wonderful score by James Horner. I spent countless hours listening to this score on repeat back in ’97 through at least ’99. It has been quite a while since I’ve listened and it still is just amazing. This amazing Collector’s Anniversary Edition is not just the score to “Titanic”. It includes much much more.

Sony Classical is the label behind this amazing 4-CD set with newly remastered versions of both the original and “Back to the Titanic” soundtracks. It also features a previously unreleased disc of period music recorded for the movie by I Salonisti (the 5-piece quintet that appears in the film) and also “Popular Music From The Titanic Era”, which is a new compilation of songs from the early 1900’s. I mean honestly what else can you ask for if you are a fan. Well, there is more…this release also comes packaged with four vintage Titanic luggage stickers and a booklet with previously unseen production photos. This is easily one of composer’s James Horner best pieces of work and it will be recognized for many years to come.

Even if you own the “Titanic” soundtrack already, I mean who doesn’t it sold over 25 million copies worldwide. I would suggest picking this up. It is a wonderful compliment to the film and includes so much new recordings that it is worth it just for the three bonus discs. I really enjoyed the disc of music from I Salonisti, which was recorded for the movie itself but never recorded. I am a big fan of music from that period and this was a great addition to the already amazing score. It really made you feel like you were re-experiencing the movie and the music for the first time.