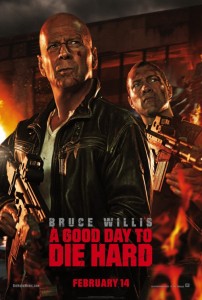 In 1988 the know-it-alls in Hollywood laughed when it was learned that 20th Century Fox had given $5 million to a television actor to star in a film whose lead character had already been offered to, and turned down by, such stars as Burt Reynolds, Sylvester Stallone, Don Johnson and Richard Gere. Of course now you know that the actor was Bruce Willis and the film was “Die Hard.” Who’s laughing now?

It’s a bad time in Russia. A political prisoner, a scientist who once worked at Chernobyl, is about to go on trial. But a member of the government does not want his voice heard, even on a witness stand. As this problem is being worked out we visit a Moscow nightclub where an assassination is attempted. The would be killer is apprehended.

In New York City we reunite with Detective John McClane (Willis). He has been informed that his son, Jack (Courtney), is currently in a Russian prison, charged with attempted murder. Though their relationship isn’t the best, John knows that a dads gotta do what a dads gotta do. Yippie Ki Yay!

Packed with wall to wall action (sometimes too much), the fifth film with the words “Die Hard” in the title is a worthy addition to the family started with John McTiernan’s classic original. Taking the story outside the United States for the first time, the story is a well written puzzle full of double-crosses, car chases and machine gun fire. The action is well delivered by director Moore, who opens the film with an incredible car chase through Moscow involving a utility van and an armored personnel carrier. Moore does not depend on miniatures or CGI in this sequence, choosing instead to destroy what surely must be every car in the Russian capital. While fun to watch, the chase seems to go on f-o-r-e-v-e-r, which eventually ratchets down the excitement. Ironically, it’s when the actors are center stage that the film succeeds. Willis and Courtney have an ease with each other, sharing the same mannerisms and smart-aleck attitude. Peeved that his son continually refers to him as “John,” McClane finally asks, “Whatever happened to dad?” Jack’s reply: “Good question.” The relationship feels real, a father and son trying to one up each other. There is even a physical resemblance between the two, with Courtney looking more like a junior Willis then Joseph Gordon-Levitt did in “Looper.”

The supporting cast also does a fine job helping the plot along, particularly Koch and Rasha Bukvic, who has some fun as a tap-dancing enforcer. Also strong as the corrupt politico is Sergey Kolesnikov, an actor who appears to have been separated at birth from the great Clancy Brown. Production values are strong and the story moves along fairly well thanks to a sharp score by Marco Beltrami.

Incidentally, there was one more actor that turned down the role of John McClane. He had appeared in the film “The Detective” which, like “Die Hard,” was based on a book by Roderick Thorpe. The actor had it in his contract that should another film based on Thorpe’s character be made, he would have first refusal of the role. Thankfully, 73 year old Frank Sinatra passed.