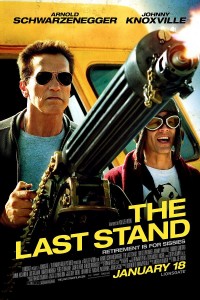 There must be something in the water in California. In 1967, actor Ronald Reagan began the first of two terms as Governor. In 2003, actor Arnold Schwarzenegger did the same. But the similarities don’t end there. Both were succeeded in office by Jerry Brown (ironically, Reagan succeeded Jerry Brown’s father). After leaving office both went on to be President. OK, just kidding there, though I’m sure it’s only the fact that, because he was born in Austria, Schwarzenegger is constitutionally prohibited from running for the office. No, now that the politics are over Schwarzenegger is back in the movie game. And he picked a good one right out of the chute.

Las Vegas. As a state trooper sits parked on the dark desert road outside of town he is startled by the roar of an engine outside. He sees nothing in the dark except his radar gun screen, flashing 197. Angered he radios in to complain about the Air Force flying their jets low to the ground. Down the highway, in the little border town of Sommerton, the local high school football team is heading out for a trip to the state championships, as is most of the town. Staying behind is Sheriff Ray Owens (Schwarzenegger), a former Los Angeles drug cop who left the city behind years ago. With most of the townsfolk away for the weekend, Ray envisions an easy weekend, turning over the care of the town to his three deputies. But fate has other ideas.

Smoothly directed and featuring characters that rise above being one dimensional, “The Last Stand” could be an old episode of “Gunsmoke,” with its theme of the law versus the bad guys. Ray is Matt Dillon while his three well meaning but inexperienced deputies (Guzman, Zach Gilford and Jaimie Alexander) are Festus. Sommerton is Dodge City and drug cartel leader Gabriel Cortez (Eduardo Noriega) is the bad guy. And what a bad guy he is. No fewer than a dozen members of law enforcement are killed when Cortez escapes federal custody, aided in his escape by a Corvette ZR-1, a car so fast that, when an attempt is made to pursue it the police are told it’s faster than their helicopter. A fast car always equals car chases and director Kim does not disappoint. In fact, all of the extreme action scenes staged by Kim are quite impressive. His camera continually moves, putting the viewer in the car and taking them along for the ride.

Cast wise it appears that Schwarzenegger still knows how to hit his mark. Now 66, the Austrian Oak has lost a step or two and isn’t afraid to acknowledge it. It’s also great to see Forest Whitaker in a role worthy of his talent. As the head of the FBI team tracking Cortez, he gets to chew a little scenery for once. Peter Stormare is in full crazy-guy mode (think of his role in “Fargo”). I’ve been a fan of Luis Guzman’s since the late 1980s so it’s always great to see him on screen. Speaking of a crazy guy, Johnny Knoxville rounds out the cast as the local goof with one hell of a gun collection.