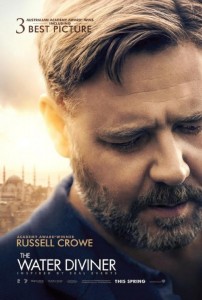 Here’s a little trivia for you. What do these people all have in common: Robert Redford, Warren Beatty, Kevin Costner, Clint Eastwood, Mel Gibson and Ron Howard? The answer is that they are all well-known actors who have won an Oscar for directing. If Hollywood thought like me, this list could also include Paul Newman, Rob Reiner, Barbra Streisand and Penny Marshall. It should already include Ben Affleck and I wouldn’t be surprised if it one day includes George Clooney. I mention all this because there is a very good chance another name could join this group soon: Russell Crowe.

Turkey, 1915. As the incredibly brutal Battle of Gallipoli rages on, the Turkish troops, led by Major Hasan (Yilmaz Erdogan) prepare for their assault on the invading Australian forces. As they charge towards the sea they are shocked to find no resistance. As they overrun the barricades they see that the Aussies have withdrawn. History will tell us that the Australian army lost over 10,000 people here; the Turks 17,000. But it will take a father’s love to begin to give all of those lost souls some sense of peace.

Brilliant in every way, “The Water Diviner” has already been honored in its native country, winning three Australian Academy Awards, including Best Picture out of a total of eight nominations. Incredibly Russell Crowe’s direction went un-nominated. There was a time many years ago when Crowe would have gone out, got pissed and kicked some asses for this slight. And I would have been right beside him! Like Kevin Costner with “Dances with Wolves,” he has taken a prime piece of history and woven it into an epic piece of storytelling. Crowe plays Joshua Connor, a farmer whose three sons went off to battle and never came home. As the countryside is quite dry (we learn that sometimes it doesn’t rain for YEARS at a time), Connor often spends his days with divining rods, looking for a place to sink his next well. It has been four years since the wars ended and Connor’s wife still grieves. She also is in disbelief, insisting that Connor go into the boy’s room before bed and read to them. To appease her, he does, and it’s heartbreaking to watch this father surrounded by three empty beds trying to get through “The Arabian Nights.”

After another family tragedy Connor sets off to Turkey in the hopes of finding his sons bodies and having them buried at home. When he arrives in Istanbul he is greeted by a young lad named Orhan (Dylan Georgiades) who leads him to a hotel run by his mother, Ayshe (Kurylenko). Her husband has also not returned from battle but she refuses to accept his death, instead stressing to her son (and herself) that he is just “away.” This is unsettling to her brother-in-law, who feels he has a duty to take her as a wife and raise his brother’s son as his own. After some red-tape cutting, Connor finds himself in the battle zone, where British troops are constantly digging up new skeletons. Joining the British in this expedition is Major Hasan and his trusted assistant, Cemal (Cem Yilmaz). Learning when the boys died, the Major leads Connor to a section of beach that stretches for miles. When the officers are questioned by others why they should change everything (they’re method of operations) for one father who can’t stay put Major Hasan replies, “because he is the only father who came looking.”

As an actor, Crowe has seldom been better. His devotion to family, his bonding with young Orhan, the growing respect and admiration he has for Orhan’s mother (and she for him) is evident in every frame. As Ayshe, Kurylenko is strong and brave, refusing to give up her husband’s memory. Erdogan and Yilmaz and also excellent, allowing just a bit of decency to creep through their military ethic. Technically, the film is beautifully done. The photography, both during the battle scenes and later, when taking in the beautiful Turkish countryside, is outstanding. Production values are top notch all around and the musical score, by David Hirshfelder (“Shine,” the recent “John Doe: Vigilante”) helps provide the right emotional cues. “The Water Diviner” is a first rate classic that’s sure to be remembered come Oscar time.