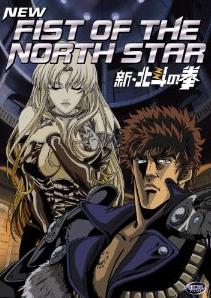 If you are a fan of Kenshiro and the “Fist of the North Star” franchise, then you know that this release is nothing new and has been released before. But since it has been long out-of-print, Section23 has given life to this OVA yet again. This is the complete OVA collection and contains all three episodes; “The Cursed City”, “The Forbidden Fist” and “When a Man Carries Sorrow”. I really enjoyed this series and it has been a while since I last saw them but they have held up well. It is crazy to believe that it has been almost 10 years since these were first released. Wow, time sure does fly. I still wish that this series will be rebooted or continued in the future cause Kenshiro is such an awesome character and he needs to continue kicking ass (and blowing people’s heads up).

Official Synopsis: A twist on the classic favorite that begins in the aftermath of the great apocalypse. Across a barren Earth, chaos is the rule and order, the exception with bandits and enterprising overlords terrorizing the survivors of the holocaust. Will a hero rise from the ashes and cut a swath of justice across the Earth’s ruined landscape?!

I was just thinking that since this was previously released on DVD, I would have loved to seen it cleaned up and coverted to Blu-ray format. That would have been ideal for this release. The DVD contains two audio tracks both English & Japanese with English Subtitles. So you have the option to watch whichever you want but of course we know that the Japanese track is the way to go. Lastly, There are no additional special features available on this release. This release is also timed perfectly with the new release of Tecmo Koei’s “Fist of the North Star: Ken’s Rage 2” available on XBOX 360 on February 5, 2012.