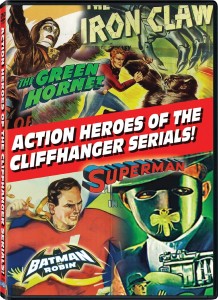 I know the action heroes serials were before my time, I still always loved watching these with my Grandfather. I mean firstly who doesn’t love heroes like Superman, The Lone Ranger and The Green Hornet? Not today’s flashy reboots but the classics serials. I remember the classic cliffhangers, “Tune in tomorrow to see…” George Reeves is always who I think of first when I think of Superman. I always love going to Walt Disney World’s Sci-Fi Diner to see “Rocket Man” still blazing on the big screen. These serials aren’t as showy as today’s films but they have that certain charm of what it was like in the good ‘ole days.

Official Premise: The movie serials came to be known as Cliffhangers because time and time again, the chapter close would find the hero or heroine literally hanging off a cliff or caught in the jaws of death — only to be continued the following week, where he or she would accomplish a daring and miraculous escape. Many serials of the 30s and 40s served as inspiration for modern-day epic films such as Star Wars and Indiana Jones. This compilation features segments of some of the best serials starring western and superheroes alike including Batman, Superman, Flash Gordon, The Lone Ranger, The Green Hornet, Rocket Man, John Wayne and so many more!

Legend Films is releasing this 1992 special, which is basically a collection of trailers and excerpts  showcasing some of these classics.  It starts off with a narration but then jumps right into the trailers and let’s them do the talking. As described above there is a little bit for everyone here whether you were a fan of superheros, westerns, or sci-fi. I would have loved to see a few actual full serial episodes included, but still though the trailers are quite fun.  They also reminded me of sitting in the drive-in cars at Walt Disney World’s Sci-Fi Diner. So if you are a fan of these serials then you will get a kick out of seeing them again and together on this DVD.