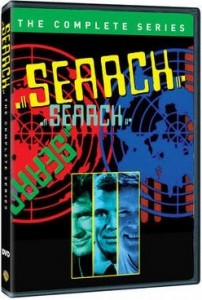 Fans of this series have been awaiting this complete series release for a while. Back in 2011, the Warner Archive Collection put out “Probe” on DVD, which is the pilot telefilm for this 1972 NBC series. This 6-Disc set contains all 23-episodes from this short-lived, yet respected series. I am a technology nerd and this show was way ahead of its time with its gadgets and goodies. I think this is probably why this show didn’t last. “Search” had a great cast including Hugh O’Brian, Doug McClure, Tony Franciosa and the great Burgess Meredith. The show was clever and quite sharp and if you are a fan of this show, this is a no-brainer.

Official Premise: Hugh O’Brian, Doug McClure and Tony Franciosa rotate leads as elite high tech espionage operatives for Probe Division of World Securities Corporation in this spy-sensational SF-flavored actioner from Leslie Stevens (creator, The Outer Limits) and Robert Justman (Producer and one of the guiding lights of Star Trek and Star Trek: The Next Generation). Each agent, dubbed a “Probe”, is wired for worldwide surveillance thanks to a Scanner (miniature video camera) and dental/ear implant. Tracking their telemetry and giving real-time mission advice is a team of specialists at Probe Control directed by the brilliant, irascible V.C.R. Cameron (Burgess Meredith).

This show also has a great collection of special guests including Stefanie Powers, Bill Bixby, Mary Ann Mobley, Sebastian Cabot, Barbara Feldon, Mel Ferrer and Joanna Cameron. This series has never been before released on DVD and thanks to Warner Archive, fans of this show can finally own this complete series. The episodes do not have with a brand new restoration but they are still solid within their original aspect ratio of 1.37:1. The episode include a mono track, which works for the DVD. This release from Warner Archive is made to order and will be available only for a limited time. There are no additional special features included on this DVD.