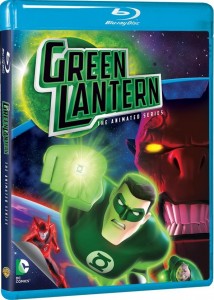 Like the “Green Lantern” live-action movie, “Green Lantern: The Animated Series” was also not given the respect that it deserved. The series was cancelled after one season and didn’t even get a chance to pick up some steam. Cartoon Network started their “DC Nation” block and then pretty much canceled all of it including this show, “Beware the Batman (which is actually in limbo) and “Young Justice”. All great shows, just not given any love. This CGI series was slick, well-done and just looked awesome. I thought that they were really going somewhere with the story, which was well-written and had some great arcs. It is action packed and also very funny (like Green Lantern should be). All 26 episodes are included in this release. If you are a fan of DC Comics, I would recommend checking this series out…and be sure to spread the word to your friend so that Green Lantern shines bright.

Official Premise: In Brightest Day, In Blackest Night! Green Lantern shines bright in DC’s radiant, groundbreaking CGI animated series. The Green Lantern Corps patrols the galaxy, fighting evil. But in the farthest reaches of deep space where few Lanterns patrol, a new evil is rising – the Red Lanterns! Hal Jordan and fellow Lantern Kilowog defy The Guardians of the Universe and board a new experimental spacecraft, the Interceptor, and race to the Guardian Frontier to face the evil Red Lanterns head-on! But a menace lurks beyond the Red Lantern invasion and Hal, Kilowog and fellow Green Lanterns Tomar-Re and Aya discover an even greater evil that threatens to extinguish all life. It’s an interstellar race to destroy the mechanical Manhunters, aid Saint Walker and his Blue Lanterns and stop the planet-eating Anti-Monitor! Pick up this exciting double-disc complete series set to see if Green Lantern’s light can defeat these powerful new enemies! If not, the universe will fall into darkness!

What I really love about a Warner Archive Collection is that a show like this would normally sit on the shelf for a while and eventually get thrown out on DVD after years of waiting…or never at all. Warner Archive is hoping giving this show a new life by releasing it not only on DVD but also Blu-ray! They have been starting getting into Blu-ray and their releases have been fantastic. The 1080p transfer is solid and the colors are just so vibrant. One thing I loved about this show was the animation style and I feel that it is so sleak and eye-catching. The DTS-HD Master Audio 2.0 track also sounds great with the explosive action-packed episodes. The thing I do not like about Warner Archive is that most of their releases are also bare-bones like this one is, but I am happy we at least have this season now and I am able to spread the word about this great series, so h hopefully Cartoon Network will regret canceling it.