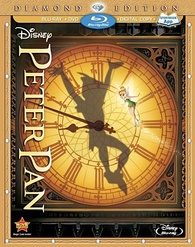 “Peter Pan” has always been my second favorite Disney movie (behind “Alice in Wonderland). It’s story is so timeless.  I mean, who doesn’t want to fly, no worries and get a chance to fight buccaneers (and pirates too!).  Seems like the perfect fairy tale  right? Walt Disney Studios is celebrating the 60th Anniversary of this wonderful classic and what better time than to release it for the first time every with a new digital restoration and high definition picture and sound on Blu-ray. “Peter Pan” is also a great display of Disney’s Golden Age of animation and was one of three films to actually include all nine of Walt Disney’s “Nine Old Men” working as Directing Animators. This release will have you soaring high, past the second star to the right and straight on ‘till morning.  If you have always wanted to take a trip to Never Land, this Blu-ray a good start to relive your childhood memories with Peter Pan, Tinker Bell, Wendy, Michael, John and Captain Hook with his band of bilge rats. If you don’t believe me take the words of the Indian Chief: “Me no spoof’em”.

Now let’s get down to the meat of this release   First of all, I am head over heals for the cover art of this release.  I love when a classic film get’s re-imagined. I understand the love of original art but this just feels so fresh and yet classic at the same time.  Disney is delivers a three-disc Blu-ray combo pack within under its well-respected Diamond Edition label.  Besides the Blu-ray disc, it also comes with a DVD, Digital Copy and even an Storybook App for iPhones and iPads. Now onto the wonderful (and probably much-debated) 1080p transfer. This film has been beautiful restored thanks to new digital advances used by the Disney restoration team. “Peter Pan” has been slightly altered in order to improve it to it’s original Walt Disney expectations.  But despite that, the film has never looked better.  And man, the colors just absolutely stunning! Disney tops it off with a first rate DTS-HD Master Audio 7.1 surround track that works so perfectly with the film’s beautiful music.  Of course, then there is also included is an original Dolby Digital Mono track. I easily prefer the 7.1 track, even if it is a little bit overkill for this film.  It still sounds amazing and really immerses you in this wonderful world of Never Land.

Disney did not skimp on the special features for this Blu-ray at all.  They come stocked with some great content.  To start there is an Introduction by Diane Disney-Miller, which has her reflecting on her father’s work. Roy Disney hosts a fantastically extensive audio commentary track, which was taken from the previous DVD release. Disney himself is a little stiff but still delivers some great knowledge and chats with animators, voice actors and more. Highly recommended. “Growing Up with Nine Old Men” is a 40+ minute feature on the Walt Disney’s famous group of lead animators. There are two deleted scenes and two deleted songs that have been restored to HD and dug out from the Disney Vault,including an alternate ending “The Journey Home”. They are presented either in original storyboards, concept art or rough cel elements format.  Also included are the classic DVD extras, starting with “Backstage Disney”, presented in SD and running just over an hour. This is made up of five behind-the-scenes featurettes and documentaries including “You Can Fly: The Making of Peter Pan,” “In Walt’s Words: Why I Made Peter Pan,” “Tinker Bell: A Fairy’s Tale,” “The Peter Pan that Almost Was” and “The Peter Pan Story”.  There is also a bunch of classics music extras as well including “Disney Song Selection”, “Deleted Song: The Pirate Song,” “Never Land: The Lost Song,” “Music Video: Never Land, performed by Paige O’Hara” and “Music Video: The Second Star to the Right, performed by T-Squad.”

Rounding out this release is one of my favorite new Disney special features, which is the “Disney Intermission”.  What is it?  Well try pausing the film at point and what what happens.  You are transported to Never Land with over 30 minutes of additional hidden treasures. Included are many fun activities and games for kids.  You can “Hunt for Peter Pan’s Shadow”, “Spot the Doubloon” and “Read Smoke Signals”, all wrapped up with video clips helmed by the first mate of the Jolly Roger.  I found myself pausing just for the heck of it. Even though I know every word to this film backwards and forwards, it is still great that a Sing-Along track is included. We also get to enjoy “DisneyView Side Bars”, which fills in the boring ‘ole black bars on the sides of the picture with beautiful artwork from Walt Disney background painter Cristy Maltese (“Beauty and the Beast” and “The Little Mermaid”). Lastly, there are a great deal of sneak peeks into what Disney has in store next including “The Little Mermaid 3D”, “Return to Never Land”, “The Adventures of Winnie the Pooh”, “The Muppet Movie”, the next “Tinker Bell” movie (no official title yet) and much more.