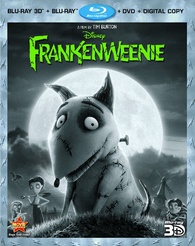 When I think about stop-motion animation, I immediately think about Tim Burton (sorry LAIKA). He is the creative genius behind one of my favorite films of all-time “The Nightmare Before Christmas”. Well Tim Burton is back at it again with “Frankenweenie”, which is actually a remake of his 1984 short live-action film. It is a homage to the 1931 film “Frankenstein”, based on Mary Shelley’s book…but with a dog. The feature film remake expands quite a bit on the short and takes the story in a new and bigger direction. This film is presented in black and white (even though filmed in color and converted) and also in 3D, which both really add A LOT to this film. This is a might be a hard sell for kids but it is must for all fans of Burton!

I had originally seen this film in 2D and there is really a lot that you miss out, no so much in your face effects but added depth. The 3D has a few really great moments in-your-face and the rest just feels really perfect and adds wonderful depth with the format. Having seen this film three times now, it is one of those films that really grows on your and gets better with repeat viewings. There are tons of odes and tributes to the classic horror genre. I found myself catching different things with each viewing, so that is definitely a big plus for Burton and horror fans.

Burton reunites with many of his usuals on “Frankenweenie” including Catherine O’Hara, Martin Landau and Winona Ryder. Tony Award winner Martin Short also voices Mr. Frankenstein and many other characters, though my favorite is Mr. Bergermeister – the Mayor of New Holland. This character is a purposeful homage to Burgermeister Meisterburger from the classic Rankin/Bass film “Santa Claus Is Comin’ to Town”. As I also expected the most annoying voice role in the film goes to Atticus Shaffer aka the weird kid from “The Middle”. He voices Edgar “E” Gore, who is inspired by Igor. I could have done with less of him personally.

Official Synopsis: From Disney and creative genius Tim Burton (“Alice in Wonderland,” “The Nightmare Before Christmas”) comes the hilarious and offbeat “Frankenweenie,” a heartwarming tale about a boy and his dog. After unexpectedly losing his beloved dog Sparky, young Victor harnesses the power of science to bring his best friend back to life—with just a few minor adjustments. He tries to hide his home-sewn creation, but when Sparky gets out, Victor’s fellow students, teachers and the entire
town learn that getting a new ‘leash on life’ can be monstrous.

Let’s get to Disney’s beautiful 4-Disc Blu-ray™ Combo Pack, including a Blu-ray 3D + Blu-ray + DVD + Digital Copy discs. Like I said I highly recommend this in 3D if possible. The 1080p transfer just look absolutely spectacular. The black and white looks very sharp and combine that with the 3D presentation and I am in heaven. To top that the release comes with an even better DTS-HD Master Audio 7.1 audio track, which is perfect for the film and Danny Elfman’s score. On a side note, I am a fan more of the standard Blu-ray + DVD box art not the 3D release box art. The standard release features more characters up front and not all background.

This releases comes with equally electrifying (get it…”It’s alive!!”) special features. They are definitely aimed for the younger audience and lacking any commentary but still entertaining.  Firstly there is an all new original short called “Captain Sparky vs The Flying Saucers”. “Miniatures In Motion: Bringing ‘Frankenweenie’ To Life” is an in-depth tour of the London set which also includes never-before-seen footage. “Frankenweenie” Touring Exhibit is a showcase that is currently traveling the world and allows audiences to explore the magic behind the film. Of course a given extra is the original live action short for “Frankenweenie”. Lastly, there is a music video for Plain White T’s “Pet Sematary”.