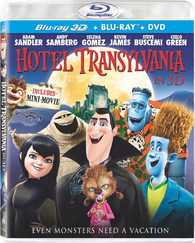 After Adam Sandler’s last few terrible films like “That’s My Boy” and Jack and Jill”, I didn’t want to see any more of him. Luckily in “Hotel Transylvania” you only have to hear him, so that works for me. This is also the directorial debut for Genndy Tartakovsky, who is known best for “Samuari Jack” and the 2003 “Star Wars: The Clone Wars” mini-series. The animation style is very different but the man definitely knows how to direct animation. I am a big fan of the classic monsters and this film feels like today’s reboot of Rankin/Bass’ “Mad Monster Party”. We get all the great monsters here and this film is actually really funny and entertaining. I would highly recommend checking this out for sure, especially in 3D if possible. Sony Animation is really stepping up its game and delivering hit after hit in this department.

Besides Adam Sandler playing the role of Dracula. Wizard of Wavery Place’s Selena Gomez plays Mavis, Dracula’s 118 year old “teenage” daughter, Andy Samberg plays the human Jonathan, Kevin James voices Frankenstein and his wife Eunice is voiced by Fran Drescher. Steve Buscemi is Wayne the Werewolf and his wife Wanda is voiced by Molly Shannon. David Spade voices Griffin the Invisible Man. Cee Lo Green is Murray, the obese mummy. Lastly, Jon Lovitz voices Quasimodo Wilson, the former Hunchback of Notre Dame now a gourmet chef. I love the twist that they put on each of these classic monsters. It adds a lot to the film and really delivers the laughs.

Official Premise: Welcome to Hotel Transylvania, Draculas lavish five-stake resort, where monsters and their families can live it up and no humans are allowed. One special weekend, Dracula (Sandler) has invited all his best friends  Frankenstein and his wife, the Mummy, the Invisible Man, the Werewolf family, and more  to celebrate his beloved daughter Maviss (Gomez) 118th birthday. For Dracula, catering to all of these legendary monsters is no problem, but the party really starts when one ordinary guy stumbles into the hotel and changes everything.

I have to come straight out and say that I feel that Sony delivers the best Blu-ray experience, specially with Blu-ray 3D. They have been very consistent and never let’s you down. This release is very impressive in all areas. It comes as a combo pack with a Blu-ray 3D disc, a stanard Blu-ray, a DVD disc and also an UltraViolet Digital Copy, which will be immediately added to my account for repeat viewings. The 1080p transfer is really perfect. The 3D effects in the film are fun and not too over-the-top. I feel that they look even better on home media format then in theaters. The DTS-HD Master Audio 5.1 track really works well with the music and crazy antics that this film delivers.

The special features are kick-ass just like the film and come jam-packed with a lot of kid-friendly goodies. First up we have “Goodnight Mr. Foot”, which is the new mini-movie also directed and animated by Genndy Tartakovsky. There are three deleted scenes included. There is a music video by Becky G Featuring will.i.am for the song “Problem (Monster Remix)”, as well as a behind-the-scenes featurette on the video. There is a really sweet commentary with Director Genndy Tartakovsky, Producer Michelle Murdocca, and Visual Effects Supervisor Daniel Kramer. I loved listening to Genndy talks about the film and Daniel giving tips about the effects used. The rest of the extras are exclusive to the Blu-ray discs including three progression reels and two Featurettes: “Meet the Staff and Guests: Voicing Hotel Transylvania” and “Making the Hotel”. Both featurettes are great and a higlight of the release.