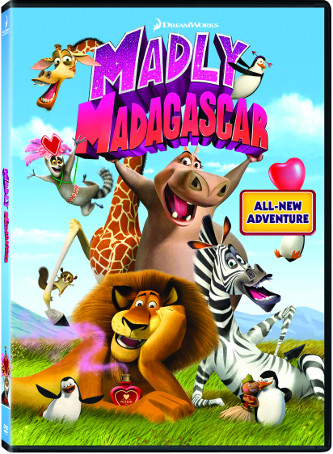 The gang is back in “Madly Madagascar” in this new Valentine’s Day-themed special. This franchise is not a stranger to holiday specials after “The Madagascar Penguins in a Christmas Caper” and “Merry Madagascar”. They were both very clever and fun. This special is loaded with great jokes and continues the trend that the “Madagascar” franchise is not even close to being dried up. I recommend this for all families to enjoy for the holiday and I hope that they have more planned in the future, while we are waiting for “Madagascar 4”.

Official Premise: Your favorite Madagascar pals are back in an all-new adventure! Alex’s favorite holiday, Valentine’s Day, brings hilarious surprises and excitement for the entire gang. Melman plans a big surprise for Gloria, Marty tries to impress a new friend and everyone wants to get their hands on King Julien’s love potion. You’ll fall in LOVE with Madly Madagascar!

I would have loved to have this film on Blu-ray, I am not sure why Fox decided not to deliver that. The special features included on the DVD are two additional animated shorts. The first is called “Hammy’s Boomerang Adventure” and the second is “First Flight”. They are both very funny and worth checking out. Since the feature is only 22 minutes, the extra content is well worth checking out. In case you think it is not worth the purchase you can always catch it on TV airing on Valentine’s Day this year…and I am sure this will become a yearly tradition.