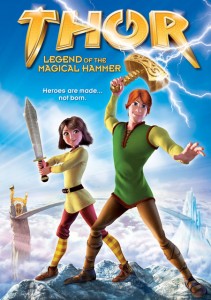 After the success of “The Avengers”, you have to imagine that there will be tons of copycats trying to cash in on its success. “Thor: Legend of the Magical Hammer” though is a pretty well done CG animated film. The story is very silly and not the sharpest but still fun, especially for kids. This film includes a few firsts This is a Walmart exclusive and is the first full-length animated film to come out of Iceland, thanks to the studio CAOZ. For that being said, it is really well done. The animation is quite impressive, if you can over the way Thor looks. Kids who are fans of superheros should definitely enjoy this.

Official Premise: Thor, the son of the mighty god Odin, battles the evil Ice Queen and her army of vicious giants in this exciting animated adventure! Thor is a village blacksmith who dreams of being a mighty warrior, practicing with a broomstick as his mother laughs at him. When a talking hammer falls from the sky, he realizes he may truly have a way to fulfill his dreams.  Soon after, the Ice Queen kidnaps his mother and the rest of the villagers, and he must reach deep inside himself to unleash his full powers to fight the queen and her army.  Will Thor and his magical hammer be enough to save the world from destruction?

On thing I just need to point out is that the Ice Queen reminded me so much like Izma from Disney’s “The Emperor’s New Groove”, she is decent baddie but no Loki. Arc Entertainment is the distributor and they have yet to cross over into 3D Blu-ray, as they barely release many Blu-ray but this film was made in 3D.  It includes many over-the-top 3D gimmicks, though would have been fun to see but remain unavailable. There are no special features besides a trailer included.  Lastly there is a Vudu digital copy of the film included.