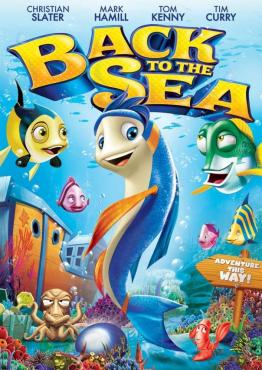 When it comes to animated films taking place under the sea, I can’t help but compare to “Finding Nemo”.  “Back to the Sea” is a low-budget (very low) animated film that steals a lot from that said film but packs a nice voice cast to boot.  I am sure this film has been sitting on the shelf for quite some time.  Viva Pictures seems to be purchasing and releasing a bunch of older shelved animated features.  Next up is “Top Cat: The Movie” and “Foodfight!” (which was made back in 2003).  Nonetheless, kids might enjoy the film due to its relation to “Nemo” and parents can get a nap or two in for sure.

Official Premise: “Back to the Sea” tells the touching story of a heroic fish’s journey home. When little fish Kevin (Slater) is swept up in a net and taken from his home in the vast oceans to the small glass fish tank of a New York restaurant, he must find a way to escape and make his way back home to his family and to the sea he loves. Together with his new found friends and with the help of his trusted human companion, the restaurant owner’s son, Kevin embarks on the journey of his life. Filled with laughs, action and heart, Back to the Sea is a great film for the whole family.

The voice cast is decent for this film.  Christian Slater (“Heathers”), Mark Hamill (“Star Wars”), Tom Kenny (“The SpongeBob SquarePants Movie”) and Tim Curry (“The Rocky Horror Picture Show”) all lend their voices to this film.  I had a hard time find out which character was Tim Curry personally.  Christian Slater really sounded like a hyper kid in the film. Mark Hamill wasn’t in it enough to be cool. I would have loved to know when they recorded these voices.  The film is currently available on DVD, only at Walmart nationwide as of December 31st, 2012.  There are no special features included on this DVD.