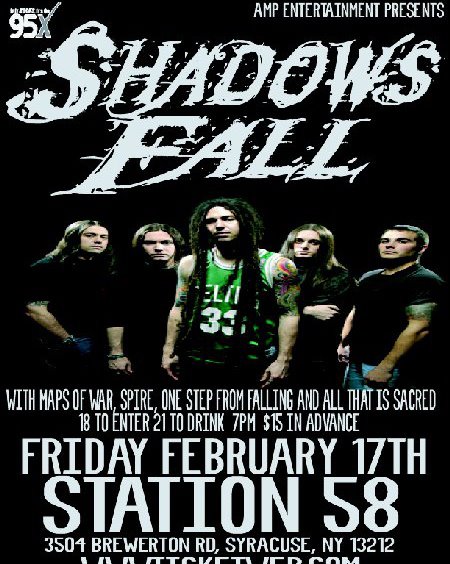 Shadows Fall came to the intimate Station 58 venue in Syracuse, NY on February 17th and performed to a near capacity crowd. The band came through the city as part of a 5 date tour that is in preparation for their appearance at this year’s Sound Waves festival held in Australia.

One Step From Falling started the night off playing an interesting blend of experimental rock that reminded me of early System of a Down however with less substance. All That Is Scared took the stage next as the club began to slowly fill and though the bands set was brief each member appeared to put their best foot forward. Local favorite Spire was up next and received a very warm welcome from the crowd. The band played a technical blend of prog metal that received a great response from the crowd that helped set the stage for the rest of the evening. Maps of War followed playing to a packed house. The band was very technical and provided an intense in your face performance.

Shadows Fall would close out the night and though the band had not performed since the summer of last year it did not show. Lead vocalist Brian Fair with his signature dreadlocks had the crowd in a sweat filled mosh from the word go. Fair took several trips into the crowd which seemed to only fuel the crowd that much more. Guitarists Jon Donais and Matt Bachand laid down their signature riffage while drummer Jason Bittner and Bassist Paul Romanko filled in the band’s sound with thunderous bass runs and beats. The band played a variety of tracks from their 6 album catalog as well as the track “Fire From the Sky” which will be on the bands upcoming album due in May of this year. Shadows Fall along with all the other bands on the bill really delivered by putting on a great show for the Syracuse crowd.