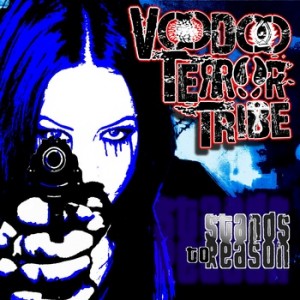 “Stands to Reason” is the latest release from the band Voodoo Terror Tribe. The band consisting of Gil PZ- Vocals, Emir Erkal- Guitars, Primer- Bass and T-Bone- Drums play a unique blend of industrial tinged metal filled with catchy lyrical content and thunderous guitar tones. The EP which is being released independently by the band and features 3 new original tracks, a remixed version of the bands song “Never Died Before” and a synth filled cover of the Journey song “Separate Ways”.

Though the album doesn’t have label backing it should not be discredited in any way. Each of the five tracks featured on “Stand to Reason” feature lush arrangements filled to the brim with pure unadulterated power. It should be noted that while recording the EP the band took a great risk venturing into new musical territory while reinventing their sound as a whole. I think this EP is a great testament to the bands new sound and I really can’t wait to hear what is in store next for the Garden State band.

For those interested in checking out the band and its new EP you can go to the bands website www.voodooterrortribe.com. There you can find out more about the band and be able to name your price when downloading songs off the new EP.