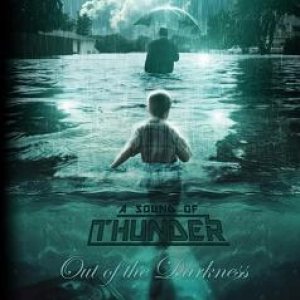 “Out of the Darkness”
A Sound of Thunder
Nightmare Records
Producer: Kevin “131” Gutierrez
Tracks: 10

“Out of the Darkness” is the latest release from the heavy metal group A Sound of Thunder. The Washington DC based band consists of Nina Osegueda- Vocals, Josh Schwartz- Guitar, Chris Haren- Drums and, Jesse Keen- Bass. The album is being released via Nightmare Records and features 10 brand new tracks produced by Kevin “131” Gutierrez (Shinedown).

The songs contained on A Sound of Thunders latest full length release could be described as a blend of 70’ and 80’s metal but with a modern twist. Vocalist Nina Osegueda takes an approach to singing that could rival the likes of Bruce Dickinson and Rob Halford as she effortlessly belts out note after note. Tracks such as “Murderous Horde” showcase not only Osegueda but the entire band as a whole. A personal favorite of mine was “Out of the Darkness” with its double bass, screeching falsetto entrance is a track that just grabs you from the very start. From a production stand point the album seemed very streamlined which I think only adds to its appeal. Though the length of some of the songs may be too much for a casual listener fans of both new and classic metal will surely want to check out this album.