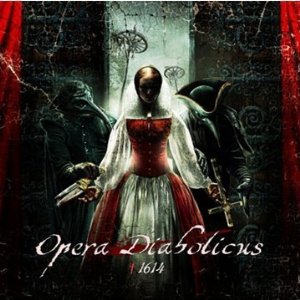 “+1614” is the first release from the doom metal group Opera Diabolicus. The idea for such a group came out of a chance meeting between composer David Grimoire and Lyricist Adrian de Crow. Together with the help of Snowy Shaw (King Diamond), Mats Leven (Yngwie Malmsteen), and Niklas Isfeldt (Dream Evil) the group has combined elements of theater and heavy metal into what makes up the 8 tracks contained on “+1614”. The album is being released via Metalville Records and was produced by Andy LaRocque (King Diamond).

If every theater production featured music like what is featured on “+1614” I would stop going to concerts and only attend stage productions. David Grimoire and the rest of the musicians featured on this recording really nailed it. The album played as though you were actually watching a stage production which was taken over by guitar wielding maniacs. The track “Mythos Lamia” featured non-stop face melting guitar solos while the song “Forbidden” was packed full of pounding bass and drums.

Opera Diabolicus’s album “+1614” is very unique and could probably be considered group breaking in its approach. I would also like to commend producer Andy LaRocque for his ability to capture all the various elements of each song. His production of the 8 tracks on this album in a way transported you into the middle of a chaotic landscape set to a an extremely technical pieces of music. Even if you are not a fan of concept or themed albums, do yourself a favor a give this album a listen. There is a lot that can be taken from this album both musically and from a production stand point.