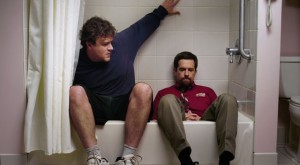 Meet Jeff (Segel). Like the title of the movie says, he lives at home. In his mother’s basement. He spends his days smoking pot and discussing the many interesting facets of the movie “Signs.” He also gets the occasional wrong number calling him. Today someone was looking for “Kevin.” Hmmmmmm.

Featuring a strong performance by Segel, “Jeff, Who Lives at Home” is a story that tries to convince us that everything happens for a reason. Good or bad, hot or cold, fast or slow…one action leads directly to another…even if there are many detours along the way.

When asked by his mother (Sarandon) to fix a simple closet door Jeff instead finds himself following a young man (Evan Ross) he spies on the bus simply because he has the name KEVIN on the back of his basketball jersey. Across town, his brother Frank (Helms) is rewarding himself for having a good week at work. Unfortunately, his wife (Judy Greer) is not too happy with the reward system Frank has come up with. She’s also tired of the lack of communication between them and may or may not be looking to reward herself with a little male company. Meanwhile, mother is dealing with a possible secret admirer at work. And what was that about KEVIN?

Bravely played by Segel, whose fondest act here is playing the part sans makeup, his constant five o-clock shadow a reminder of his life, “Jeff, Who Lives at Home” is a true family comedy with a truly dysfunctional family. Whereby Jeff can get along without all of the trimmings of life (car, house…even a girlfriend), Frank considers these things the most important symbols that he is indeed living a life. Coming across almost as cocky as Danny McBride’s Kenny Powers, Helms does his best to make the audience feel for a character who really doesn’t deserve sympathy. Frank is pretty much one dimensional so credit to Helms for trying. Sarandon gives a strong performance as a woman who doesn’t realize she misses the life she once had. Kudos as well to supporting work by Greer and Rae Dawn Chong, who plays a co-worker of Sarandon’s. But the film breathes through Segel, who says more here with his eyes then some actors say in a two page monologue. If not for a telegraphed, treacle-filled ending, “Jeff, Who Lives at Home” could have been practically perfect. But at least it’s better then “Signs.”