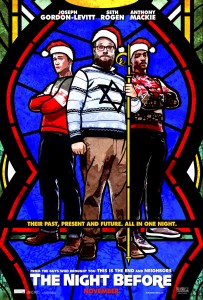 Not since “Bad Santa” has a vulgar comedy elicited this much holiday joy. If you’re looking for something besides the network television claymation specials and the obligatory “A Christmas Story” and “It’s a Wonderful Life” showings on TV, “The Night Before” is a much welcome sight at the box office.

While Christmas is sweet like milk and cookies for most, the holidays are a spoiled milk time of year for Ethan (Gordon-Levitt). That’s because when he was younger, his parents passed away on Christmas Eve. There to help pick Ethan up that day were Isaac (Rogen) and Chris (Mackie). Like any good (or bad depending on how you view it) friend, they helped Ethan get over the tremendous loss with drugs and alcohol, and thus a tradition was born.

Every Christmas Eve, the three young wise men head out into New York City, do drugs, check out Christmas lights while high, get drunk, sing karaoke, and consume massive amounts of Chinese food. But something has evaded them, the Nutcracker Ball. It’s a mysterious event that takes place in a secret location one day a year, barely known amongst the general populous. Flash forward 14 years later, Isaac is preparing for his first child, Chris is dealing with football fame, and Ethan is dealing with another holiday tragedy. It’s time for one more drunken hurrah for the three, including some stolen tickets to the coveted Nutcracker Ball.

“The Night Before” spikes the eggnog and laces the mistletoe with hallucinogens, but it accomplishes that rare Christmas miracle, of making my Grinch heart grow three sizes. Most holiday movies feel unnecessarily cheesy with their forced warmth, but “The Night Before” has a genuine heart. A lot of that credit can go to Jonathan Levine, who struck pay dirt with Gordon-Levitt and Rogen before in “50/50”, another film that plucked the right heart strings.

What Levine’s movie tragically suffers from is an ADD direction. It feels a bit long as the script hurriedly goes from idea to another. Some of those ideas are a wonderfully constructed laugh riot and at other times those ideas seem like everyone was comfortable settling for a predictable chuckle. Rogen handles the bulk of comedy, while Gordon-Levitt handles the emotion, and Mackie completes the trio by being the bridge and glue between the two extremes.

The three are complemented by a slew of others. There are some shameless appearances by real life stars that feel more forced than natural. But the real gem of the movie is Michael Shannon. Shannon plays a prophetic drug dealer that crosses paths with the three and serves as a spiritual leader for the three, with pot of course. Jillian Bell does a great fill-in as Rogen’s pregnant wife and helps set-up some of the best jokes for Rogen to spike to the audience.

“The Night Before” is a familiar movie, but that’s because it enriches itself with an understanding of what makes a Christmas movie. It takes the plot devices from holiday stories like “A Christmas Carol” and others, but it adds its own flavor to them. Some are more obvious than others while some are clearly used to make that one person in the audience smile. “The Night Before” is a complimentary movie to the upcoming holidays, whether it be to laugh with friends and family or to alleviate the mounting stress we face.