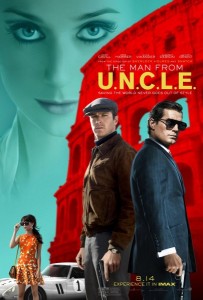 As a young boy growing up in the 1960s I learned very quickly that the Catholic school system frowned on popular culture. Two times during my second grade year I was sent to the office. The first time came after I was scolded several times for playing the tambourine in music class off of my hip, like Davy Jones did on “The Monkees.” The second was when I held my pen to my mouth and commanded in a loud voice, “Open Channel D,” just like Napoleon Solo did each week on “The Man from U.N.C.L.E.” Of course, I should have known better. As Whoopi Goldberg pointed out in “Ghost,” nuns can’t even buy underwear so why should they have a sense of humor?

It’s the start of the Cold War. An evil villain has obtained the ability to make an atom bomb. In an unprecedented move, the C.I.A. and the KGB agree to team up their two best agents: Napoleon Solo (Cavill) and Illya Kuryakin. Like the relationship between their respective countries, the two are wary of each other. But orders are orders.

A straight-forward action film that owes its look to James Bond (“Bond” creator Ian Fleming actually helped create the original television program, which was initially titled “Ian Fleming’s SOLO), Matt Helms and a plethora of spy films that came before it, “U.N.C.L.E.” works thanks to its cast and the steady hand of director Guy Ritchie. Englishman Cavill is spot on as Solo, so much so that I’m sure somewhere Robert Vaughn is smiling. Hammer is equally enjoyable as the easily-angered Russian. Hammer was pretty much lost in the crowd in the box-office fiasco that was “The Lone Ranger” and it’s nice to see him inhabit a character completely and confidently.

The set pieces are beautifully photographed and the action unfolds smoothly. If you’re expecting the kinetic editing tricks Ritchie used in the “Sherlock Holmes” films, prepare to be surprised. Long-time fans of the series may quibble a bit with the back-story given Solo. They may also be a step or two ahead of the script when Hugh Grant is introduced as Mr. Waverly. That being said, neither of those facts kept this fan from enjoying the film immensely.