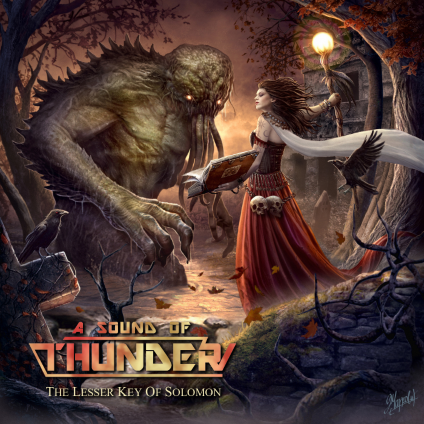 “If your erection lasts longer than four hours, you probably listened to our new album.  Also, you’re welcome” jokes Osegueda. “On a serious note, this album is our best work to date.  The songwriting and performances from the band are on another level.  The album was a joy to make and that comes through in the final recording.”

Hot off the 2013 release of “Time’s Arrow”, their best-selling and best reviewed release to date, A Sound of Thunder was brimming with confidence and eager to get back into the recording studio.  With too many musical ideas for just one album, the band selected only its darkest and most atmospheric material for “The Lesser Key of Solomon”.  The result is an ominous collection of songs united by supernatural themes.  The album represents the fulfillment of a promise to A Sound of Thunder’s fans, known as the “Legion of Thunder”, who funded the album via the Kickstarter crowd-funding platform in the autumn of 2013, raising over $23,000.

“The Lesser Key of Solomon”, running time 61 minutes, features 10 of A Sound of Thunder’s most intense yet nuanced songs, exploring territory which is simultaneously heavier and more atmospheric than ever before. The steel-armored wail of prodigal vocalist Nina Osegueda (called by some “the lovechild of Rob Halford and Bruce Dickinson”) tops off deft performances by a band that knows how to deliver the goods. From the demonic fire of “Udoroth”, to the crushing Dio-esque “Master of Pain”, to the sweeping scope and dark theatricality of “Elijah”, A Sound of Thunder delivers a timeless album full of metal classics.
The Lesser Key Of Solomon available as a digital download, compact disc, and limited deluxe vinyl-book format.

Tracklisting includes:
Nexus Of Realities, Udoroth, Fortune Teller, The Boy Who Could Fly, Elijah, Master Of Pain, Blood From The Mummys Tomb, Black Secrets, One Empty Grave, House Of Bones

Join the Legion of Thunder and help “A Sound of Thunder” complete our next epic full-length album TIME’S ARROW…11 new tracks of classic metal! Click here to see how you can help them out on Kickstarter!

The title of our new album is TIME’S ARROW.  We’ve already begun recording with the same band lineup, studio and producer as OUT OF THE DARKNESS, and a new batch of 11 songs that will blow you away! The centerpiece of the album is the epic 9-minute sci-fi/metal title track “Time’s Arrow”, based on a short-story by our drummer Chris Haren. The album as a whole touches on our roots in metal, prog, classic rock, and even classical, blues, and jazz, and takes us into new territory while maintaining the overall classic metal sound.

Drums, bass, and rhythm guitars for TIME’S ARROW have already been completely recorded.  With your help we will track lead vocals, lead guitars, and keyboards, then mix the final album all at Assembly Line Studios in Vienna, Virginia.  Studio time is already tentatively booked and with your support we’ll complete the album this fall!

You can order TIME’S ARROW in the following formats:

(Larger rewards that include the Honored Heroes Pack can be upgraded to the Box Set…just add $30 to your pledge, or contact the band!)

In addition to the full-length album TIME’S ARROW, we are announcing another release, the QUEEN OF HELL EP, exclusively available to fans who help us fund TIME’S ARROW via Kickstarter!   That’s right, a unique release by the band ONLY AVAILABLE HERE!

Click here to see how you can help them out on Kickstarter!