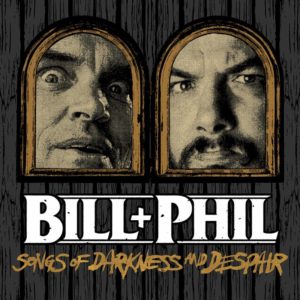 From preppie journalist to Satanic serial killer, Bill Moseley’s taken a long and unusual road to cult stardom, firmly cementing his place in the annals of horror history along the way. Having released his Spider Mountain record, and collaborated with Buckethead on their Cornbugs project, Moseley expands his musical endeavors by teaming up with Anselmo. BILL & PHIL‘s Songs Of Darkness And Despair is a brilliant trip that will give everyone a thrill.
Comments Anselmo: “Working with Mr. Moseley was an awesome experience! Bill brought the lyrics and Stephen [Berrigan] and I just improvised directly on the spot, and squeezed out six tunes in three days. All the songs have a different vibe because I wanted the music to represent Bill’s lyrical vision(s), and we needed to, because Bill does indeed have a unique, visual element within his choice of words and phrasing. I love Bill Moseley, and can’t wait to work on the next one! Be cool and enjoy this one!”
BILL & PHIL‘s Songs Of Darkness And Despair preorder bundles (including limited edition air fresheners and face masks) are available at The Housecore Store RIGHT HERE.
Songs Of Darkness And Despair Track Listing:
1. Dirty Eye
2. Corpus Crispy
3. Catastrophic
4. Widder Woman
5. Tonight’s The Night We Die
6. Bad Donu