To celebrate the Blu-ray release of “Tarzan” starring The Twilight Saga’s Kellan Lutz, Media Mikes is excited to giveaway one (1) copy to our readers. If you would like to enter for your chance to win one of this prize, please leave us a comment below or send us an email with your favorite “Tarzan” adaptation. This giveaway will remain open until August 15th at Noon, Eastern Time. This is open to our readers in US and Canada only. One entry per person, per household. All other entries will be considered invalid. Media Mikes will randomly select winners. Winners will be alerted via email.

During an expedition to a remote African jungle, the Greystoke family’s helicopter crashes, leaving one survivor: the young boy J.J., nicknamed Tarzan. Raised by gorillas, Tarzan lives by the laws of the jungle — until he encounters another human being, the courageous and beautiful Jane Porter. For Tarzan and Jane, it’s love at first sight — and the beginning of a thrilling adventure — as Tarzan uses his instincts and intellect to protect his jungle home and the woman he loves. 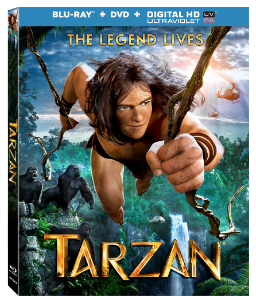 Experience The Legend When The Action-Packed Family Film Arrives On Blu-ray, DVD and Video On Demand August 5 From Lionsgate Home Entertainment

SANTA MONICA, CA, June 2, 2014 – Kellan Lutz (The Twilight Saga franchise) headlines the newest incarnation of the iconic tale Tarzan®, available on Blu-ray (plus Digital HD) and DVD (plus Digital) exclusively at Walmart August 5 from Lionsgate Home Entertainment. The film will be available on Video on Demand and Pay-Per-View everywhere the same day. Tarzan will be available three weeks earlier on Digital HD July 15. Based on the ‘Tarzan’ stories created by Edgar Rice Burroughs, one of the most classic coming of age stories of all time is now completely re-imagined for a new generation in stunning CGI-animation. In its initial theatrical release the film has grossed over $35 million globally. Directed by Reinhard Klooss (Animals United) from a screen story and screenplay by him as well, Tarzan also features the voice talents of Spencer Locke (Resident Evil: Afterlife) and Jaime Ray Newman (TV’s “Mind Games”).

During an expedition to a remote African jungle, the Greystoke family’s helicopter crashes, leaving one survivor: the young boy J.J., nicknamed Tarzan. Raised by gorillas, Tarzan lives by the laws of the jungle — until he encounters another human being, the courageous and beautiful Jane Porter. For Tarzan and Jane, it’s love at first sight — and the beginning of a thrilling adventure — as Tarzan uses his instincts and intellect to protect his jungle home and the woman he loves.

With bonus material including three behind-the-scenes featurettes, Tarzan will be available on Blu-ray and DVD exclusively at Walmart for the suggested retail price of $19.99 and $19.98, respectively.

“Greystoke: The Legend of Tarzan, Lord of the Apes” might not be considered the most popular portrayal of Tarzan but has always been one of my favorites. It is far for the worst, has anyone ever seen “Tarzan and the Lost City” back in 1998. Christopher Lambert aka Connor MacLeod from “Highlander”. took on the lead role in the film and does a great job. This version on the Blu-ray is the same extended version of the film which is roughly six minutes longer than the theatrical cut. This production is quite lavish and very beautifully shot.  It also focuses on the character’s dual nature as King of the jungle and as John Clayton, seventh Earl of Greystoke, heir to one of Scotland’s great estates. So I liked that angle of Edgar Rice Burroughs’ story being explored within the film. If you have never seen this film, this would be the way to watch it for sure.

Official Premise: Hugh Hudson’s refreshingly adult revisionist take on Edgar Rice Burroughs’ immortal apeman arrives on Blu-ray like a blast of warm rain forest air. Robert Towne’s script (writing as P.H. Vazak) hews close to Burroughs’ origin as found in Tarzan of the Apes by way of modern anthropology. The second half may thread in some movie mythos (like Jane as English gentry) but plays out its savage vs. civilization theme. Gorgeously shot by John Alcott (The Shining, Who Is Killing the Great Chefs of Europe?), Greystoke also boasts an acting pedigree worthy of Burke’s peerage, including Ralph Richardson, Ian Holm , David Suchet, James Fox, and Nigel Davenport with Andie MacDowell and Glenn Close handling Jane physicality and vocality respectively. But the film belongs to Lambert’s heart-wide open performance as Tarzan and Rick Baker’s amazing simian simulations.

Thanks for Warner Archive for giving this film some love to this.  This film has never looked better on this Blu-ray.  Warner Archive has been slowly crossing over into the world of Blu-ray with these classics and this one really benefited from the format. This Blu-ray was set to be released numerous times but was held back in order to perfect the transfer and damn, did it make a difference. The 1080p transfer looks stunning and it has been taken from impressive sources that have been restored with a very close eye to attention.  The film was originally with Dolby Stereo on 35mm and even had a 70mm release with 6-track sound and this film sounds amazing on Blu-ray with its DTS-HD Master Audio 5.1 track. It works very well with the action and jungle scenes.  The special features are not jam-packed but still work checking out.  There is a fine commentary track with Director Hugh Hudson and Line Producer Garth Thomas, which is quite detailed and thorough.  Lastly there is a trailer included. 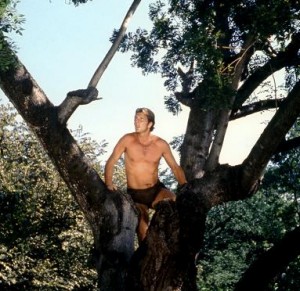 Warner Archive is responsible for bringing this classic 60’s TV series to DVD for the first time.  Season one is split into two parts.  The first part consists of a 4-disc collection and contains 15 episodes.  The secon part also consists of a 4-disc collection and contains the remaining 16 episodes in the first season.  Warner Bros did a great job of restoring this TV show and it is presented in full frame. For a show that has never been on DVD before and is nearing 40 years old, it looks really sharp.

I really enjoyed watching the first season of “Tarzan”.  It is a fun show that doesn’t expect too much.  It also includes some awesome guest stars as well such as Nichelle Nicholas from “Star Trek”, Woody Strode, Russ Tamblyn and even the former Tarzan Jock Mahoney.  If you are a fan of this series, you are going to really enjoy the 25 hours of vine swinging adventures of our animal loving friend. My only major complaint about watching this series has nothing to do with Warner’s release or restoration but the terrible stock footage used in some scenes.  I hope Warner Archive is planning on release further seasons of this as well.

Part One Synopsis:Premiering on NBC in 1966, Edgar Rice Burroughs’ immortal creation, Tarzan, took to the nation’s TV screens for the first time. Still in the capable hands of producer Sy Weintraub, the TV Tarzan (Ron Ely) continued the more recent (and more authentic) interpretation of Lord Greystoke as a sophisticated, articulate jungle adventurer as seen in the Tarzan films of Gordon Scott, Jock Mahoney and Mike Henry. Also carried over from the big screen was young actor Manuel Padilla (Tarzan and the Valley of Gold, Tarzan and the Great River), now playing the jungle lord’s kid sidekick alongside Cheetah, the simian one. The first half of his inaugural season finds Tarzan rescuing seeing-eye lions, endangered leopards, and pampered princes while battling man-eaters, despots and deadly arachnids in this 4-Disc, 15-Episode collection. Guest stars include former Tarzan Jock Mahoney, Star Trek’s Nichelle Nichols, Woody Strode, and Russ Tamblyn.

Part Two Synopsis:Ron Ely continues his memorable run as Edgar Rice Burroughs’ Tarzan in the second half of his first season. This 16-Episode, 4-Disc collection sees the Lord of the Jungle and his stalwart second bananas, Jai the jungle boy (Manuel Padilla) and Cheetah the chimp, facing off against some of their most formidable challenges alongside a bevy of powerhouse performer guest stars. Stage and screen legend Julie Harris makes her first appearance as the imperiled, imperious missionary Charity Jones and Maurice Evans makes his memorable debut as Sir Basil Bertram. And the action continues to heat up with volcanic eruptions, earthquakes, phantom dinosaurs and more fantastic jungle menaces. Adding their talents to the drama and the dangers are Susan Oliver, Chips Rafferty, Gia Scala, Sally Kellerman and Jack Elam.