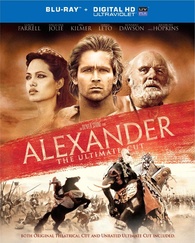 “Alexander” is like the film that never goes away. Since the film was released 10 years ago there has been various cuts of the film from The Theatrical Cut to The Final Cut (which wasn’t the final cut) and now we have The Ultimate Cut right in time for the film’s 10th Anniversary. Oliver Stone really does love editing his films after they are done. The Theatrical Cut was released in 2004 and is 175 minutes. The Final Cut released in 2007 is a whopping 213 minutes and is actually structured much differently. The Ultimate Cut is a little slimmer but not by much clocking in at 206 minutes with an intermission.

Official Premise: Alexander is based on the true story of one of history’s most luminous and influential leaders; a man who had conquered 90% of the known world by the age of 25. The film chronicles Alexander’s path to becoming a living legend, from a youth fuelled by dreams of myth, glory and adventure, to his intense bonds with his closest companions, to his lonely death as a ruler of a vast empire. The film stars Colin Farrell as Alexander, Angelina Jolie as Queen Olympias, Val Kilmer as King Philip II, Anthony Hopkins as Ptolemy, Jared Leto as Hephaistion, Rosario Dawson as Roxana, Christopher Plummer as Aristotle, and Jonathan Rhys Meyers as Cassander.

Since the film was original cut to reduce violence and sexuality, the director was unable to achieve his vision. With this Ultimate Cut, Stone follows closely to the outline of his original script and clocking in 31 minutes longer that the theatrical cut, this is in fact the Ultimate Cut of this film. I have to admit, this is actually a better cut than the theatrical release. This 10th Anniversary Blu-ray both the 2004 theatrical cut and the new Ultimate Cut. I would have loved to see them go to hell with themselves and just include The Final Cut as well. This Blu-ray also includes The Ultimate Cut on Digital HD with UltraViolet.

I was really impressed with the special features included for this release because the new cut is a bonus enough but they went ahead and still delivered a bunch of new extras. Firstly, there is a new documentary “The Real Alexander and the World He Made”, which looks into the life and legacy of Alexander the Great. There is a brand new Ultimate Cut commentary track from Oliver Stone, as well as a theatrical cut commentary was well with Oliver Stone and Robin Lane Fox. Oliver’s also talented son Sean Stone has his own feature-length documentary called “Fight Against Time: Oliver Stone’s Alexander”.

There is also four featurettes included on the production including “Resurrecting Alexander”, “Perfect Is The Enemy of Good”, “The Death of Alexander” and “Vangelis Scores Alexander”. But wait there is still more included here. There is an awesome “The Art of Alexander”40-page art book, which features numerous concept drawings, production storyboards and behind-the-scenes photographs. As well as collectible packaging, with correspondence memos between Oliver Stone and his cast and crew. If you enjoyed this film or didn’t enjoy this film, this is a really great collectible and a much improved cut of the film for sure.