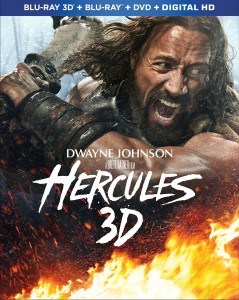 Even the great get a pass every now and then right? Dwayne Johnson is definitely the kind of Hollywood action films right now but this one is not one of the best. It does get some props for having some pretty epic battles and impressive visuals but it is not a film to me that really screams repeat viewing. When I think of “Hercules”, I think about epic world of gods and monsters but here we get more human war battles. It is not necessarily bad since like I said the action is solid but it is not very memorable either.

Official Premise: Both man and myth, Hercules (Johnson) leads a band of mercenaries to help end a bloody civil war in the land of Thrace and return the rightful king to his throne. A tormented soul from birth, Hercules has the strength of a God but feels the suffering of a human. Unimaginable villains will test the mythical power of Hercules in Director Brett Ratner’s gritty take on one of the most epic action heroes of the ages.

Paramount is releasing “Hercules” in a combo pack with a 3D Blu-ray, standard Blu-ray, DVD and Digital HD copy. This release includes bot the theatrical version of the film in both 3D and 2D, as well as an extended cut (but only in 2D) with exciting new action not seen in theaters. I am torn because I liked the film in 3D but the extended cut plays better as a film. The 3D transfer is solid and works great with the visual effects. The film also works in 2D but any epic battle scenes or creature scenes are lacking that extra punch. The DTS-HD Master Audio 7.1 track is a huge success and delivers the epic feel of this film very well.

The special features are solid and start with “Brett Ratner and Dwayne Johnson: An Introduction”. There is an audio commentary by director Brett Ratner and producer Beau Flynn on the theatrical version. “Hercules and his Mercenaries” looks into the team assembled for the film. “Weapons!” is a self explanatory extra, which focuses on action scenes and training. “The Bessi Battle” looks at the film’s major action sequence. “The Effects of Hercules” is a look at the film’s visual effects. Lastly there are 15 deleted/extended scenes.